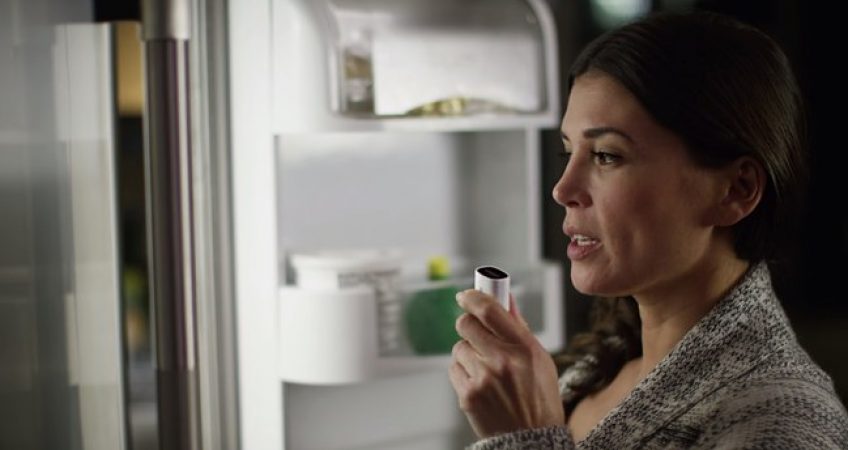 Excerpt from The New Yorker

Last week, two days before announcing that it would be acquiring WholeFoods, Amazon released a short promotional video for a new product called the Dash Wand. The Wand is a candy-bar-size gizmo that costs twenty dollars. It sticks to your refrigerator with magnets and lets you order products by talking —it features Amazons voice assistant, Alexa—or by scanning barcodes.

In the video, an affluent, middle-aged couple drift through their spotless kitchen, preparing for a dinner party

. The woman peers into the fridge, where she discovers a bag of pre-peeled shrimp. She asks the Wand for a simple shrimp-pasta recipe, then orders ingredients for it, scanning the barcode of an empty jar of pasta sauce and proclaiming, “Mushrooms!” The next day, these items are delivered in a cooler bag. While cooking, she uses up the white wine, so the man,who’s milling around in the kitchen, tells the Wand, “Order white winefrom Prime Now.” (Prime Now is Amazons same-day delivery service.) Shortly before the dinner guests arrive, he says, “Dim lights to seventy per cent.” When the other couples materialize, the thoroughly unstressed host proposes a toast: “To old friends!”

It hasn’t always been obvious that Amazon would transform the feeling of everyday life. At first, the company looked like a bookstore; next, it became a mass retailer; later, for somewhat obscure reasons, it transformed into a television and movie studio. It seemed to be growing horizontally, by learning to sell new kinds of products. But Amazonwasn’t just getting wider; it was getting deeper, too. It wasn’t just selling products but inventing a new method of selling; behind the scenes, it was using technology to vertically integrate nearly the entire process of consumption. This integration is Amazon’s real product. It’s what you purchase when you become a member of AmazonPrime. (According to some estimates, eighty million American households— more than sixty per cent of the total— have Prime memberships.)

Where will it end? At first, as Amazon added more building blocks to its toolkit, the world changed in intangible ways. Ordering got easier;packages arrived faster. Lately, though, the physical changes have grown more apparent. Already, we spend less time shopping in the physical world. Now the disappearance of bookstores seems to be extending to retail stores more generally. Grocery stores, too, will soon be thinner on the ground. Along with the leaf blower and the ice-cream truck, the delivery van, nosing into one driveway after another, is now a staple of suburban life.