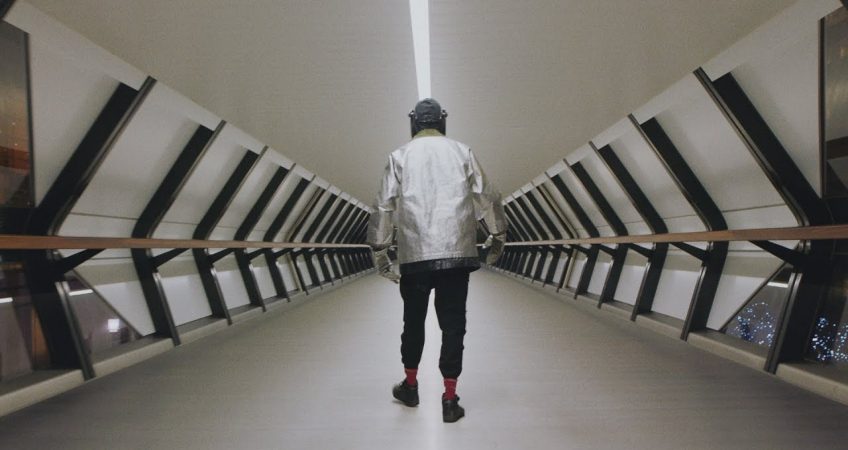 The video for X22RME (pronounced “Extreme”), a minimal apocalyptic expanse that somehow remains fashion-forward, was directed by Dan Emmerson.

The album is themed around chrome – both as a reflective surface to see the self in, and as something that carves luminous voids out of any color and fine focuses white and black representing the perfect metaphor for the bleakness of life in the Metropolis as suggested by Anish Kapoors Cloud Gate.

Another way to approach would be through the art of James Hampton and Rammellzee (who inspired “CYN,” which Cunningham also sees as a vision of New York in reverse…) – both of whom, though of different generations of the African-American slave diaspora, created art through “Sourcing castaway materials from their environment and re-interpreting them into absolute majesty given from the fourth dimension.” There is also the career-long influence of the Detroit techno pioneers, something which becomes clear on this album “there is a contrast in the type of glow or reflection”.

The lead single “X22RME” elegantly plays between the lines of Oriental classic rave and Balinese warehouse Techno machined in a Rotherhithe lock up welding the grooves into a seamless cracked joint.

At the other end of the spectrum is “Faure in Chrome,” a byproduct or development from his collaboration with the London Contemporary Orchestra, in which he “re-patterns” aspect of Faure’s Requiem into a piece which sounds like the very institution of classical music being encased in electronic ice and scanned through a high frequency bandwidth.

As if the record itself isn’t enough, Cunningham is currently preparing a new live show, to be debuted at as part of Convergence at Village Underground on March 24th. Presented as AZD, Cunningham says it “will be a test frame for linking circuits using various forms of language — — to create one intelligent musical insMidi globalized language, Lyrical language, Tikal Graffiti code and various other Synthesizer language trument called AZD, if successful it will produce the first translucent, non-soluble communication sound pill synergized through impressionistic interpretations of technological equipment. This is the music vitamin of the Metropolis.”