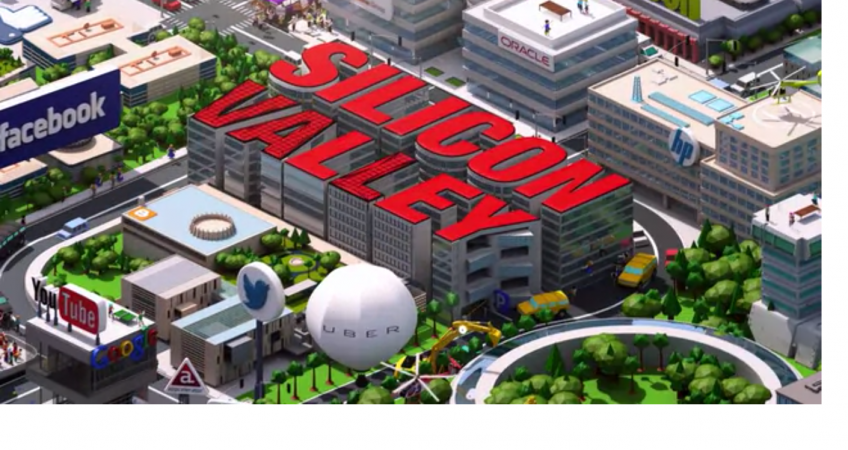 The title sequence for HBO’s Silicon Valley is by far the most efficiently entertaining thing on television. In its scant 10 seconds, it manages to be at once satire, in-joke, and charter of tech cultures shifting corporate landscape  while packing the screen with blink-and-you’ll-miss-it sight gags.

There are titans like Google, Facebook, and Apple, which goes from a small store to its hypothetical Loop Campus. There are also reminders of technology’s mercurial nature: the rise and fall of a Napster balloon; buildings emblazoned with Netscape, MySpace, and Silicon Graphics, Inc.

In keeping with that spirit, Silicon Valley co-creators Mike Judge and Alec Berg decided early on to chart the game of corporate musical chairs in Silicon Valley, and kept track of big company progress and headline news while they researched subsequent seasons. When the second season came around, the title sequence reflected Facebook’s acquisitions of WhatsApp and Oculus, as well as Uber’s giant rising balloon taking the place of Napster. Garson Yu, the founder of yU+co, had the idea to shift the Yahoo building at the end to instead feature the Alibaba logo. And most subtly, inspired by an actual Oakland incident where protesters blocked and vomited on a Yahoo bus, there’s a tiny re-enactment in the upper left corner of the screen just as the sequence ends. Judge says that there have been plenty of extraneous ideas that ended up not making the cut. “At one point Space-X was in there,” Judge said, “but then I decided that was in L.A. and really had no connection other than Elon Musk.”
Read the story on WIRED
TAGS: artscultureDESIGNmediasilicon valleysilicon valley hbotech