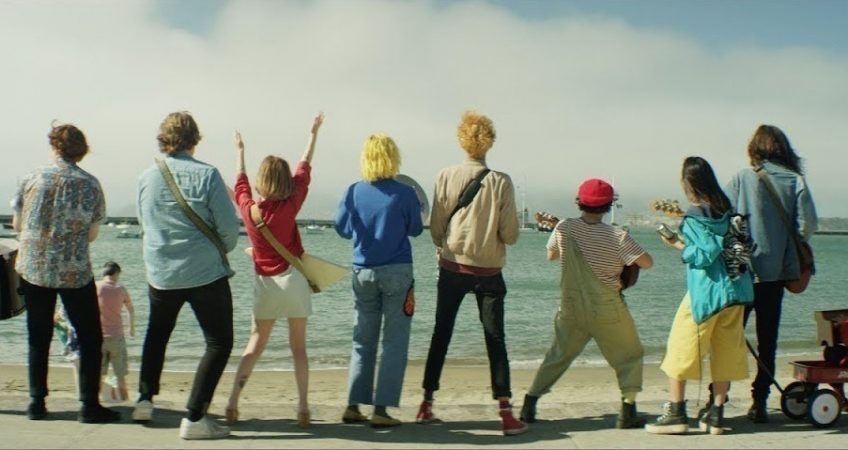 There is a strong presence of the artistic community that runs all the way through “The Bus Song” video, Melina Duterte aka Jay Som’s sincere ode to public transportation. Former tour mate of Duterte, Michelle Zauner of Japanese Breakfast, directed the ebullient video that captures a day of merriment while taking a fun junket around iconic locations in San Francisco and Oakland. Melina, dressed in her salute to Where’s Waldo get-up, leads her band members and friends to Bernal Heights, Lake Merritt, and Lombard Street while picking up followers and embracing the joy of the day. Plush, Future Shapes and No Vacation, all bands with Bay Area and Jay Som affiliations, make cameo appearances as well.

“I worked on the video with Adam Kolodny, my Director of Photography who has shot all the Japanese Breakfast videos. It was important to me to really try to showcase Melina’s infectious charm and sense of humor. There is something just so lovable about her, it was great to try to capture her in her element, surrounded by her friends. The video feels like a love letter to the bay area.

It was also important to me to focus on all the dynamic shifts in the song. It has a huge arrangement, all instruments Melina played, and I wanted to make something that really drew attention to that. An ensemble cast, lots of colors, captured in a lot of wide and lateral tracking shots really helped us amplify those dynamics and showcase our locations.”

Everybody Works, Jay Som’s proper début album which Duterte wrote, recorded, played and produced herself, has found itself on “Best of 2017 So Far” lists from the likes of Rolling Stone, Billboard, Entertainment Weekly, Stereogum, SPIN, Consequence of Sound, Paste, Uproxx, Newsweek, Newsday, Under The Radar and more.

Duterte’s reserved vocal positioning, scattered among the versatile genre-verse that she chooses to peruse…dream-pop, shoegaze, acoustic-folk and slinky r&b leanings…makes Everybody Works a ten-song traverse that casts a mature shadow far beyond her 22 years. The overall conviction in her lyrics of acknowledging how to figure out the everyday musings that make all of us human…sustainable working situations, relationships, and feelings. This Oakland resident has made a cohesive arc of ideas that anyone with a pulse can connect to.