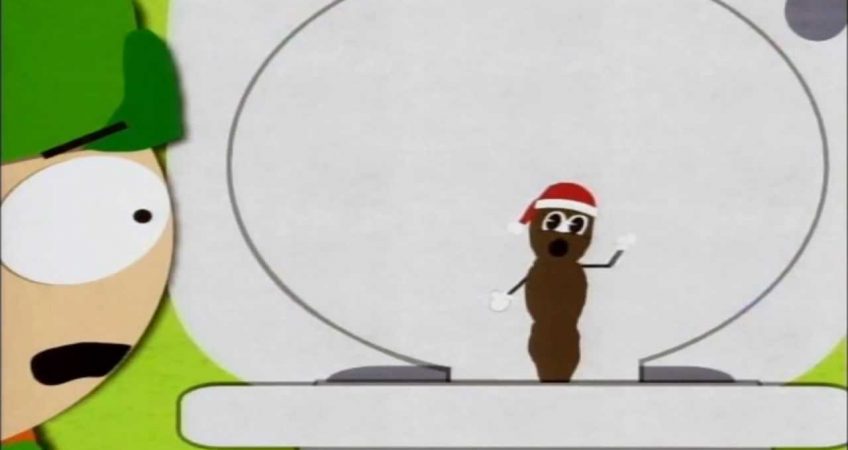 It’s December, so it’s time to dust off those Christmas movies, those Christmas movies that aren’t really Christmas movies, or whatever side of that wall you think Die Hard falls on. But what if you’re in a holiday mood but not up for the whole two-hour jaunt to Bedford Falls? Or want something classic and familiar, but maybe a little more recent? Check out our list of almost two dozen classic TV holiday episodes: You can travel back in time with Quantum Leap or WKRP In Cincinnati, do a quick 20-odd minute holiday party psych-up with Community or 30 Rock, or check in to see what all the fuss is about on a newer show like Unbreakable Kimmy Schmidt or Crazy Ex-Girlfriend. And even if you’re not down with the whole holiday season, we’ll meet you over at the hip-hop Santa dance-off or at the Festivus pole for the annual airing of grievances. We’ve got a lot of problems with you people, and now you’re going to hear about it.

Things are rather bleak for the majority of the U.K. Office’s concluding two-part Christmas special. Love-to-hate boss David Brent (Ricky Gervais) is no longer officially in the Slough office, traveling around doing sales calls. In a meta tack, he’s also attempting to cash in on his newfound celebrity after The Office “documentary” with a series of degrading bar appearances, and trying and failing to find an acceptable date on Twitter. Gareth (Mackenzie Crook) is the new boss, Dawn (Lucy Davis, Wonder Woman’s Etta Candy) is stuck out in California caring for her boyfriend’s baby, and Tim (Martin Freeman) is trying his hardest to forget the girl that got away. Fortunately, everything comes to a head at the company Christmas party, where David finally finds someone who appreciates him, and stands up to sexist office assholes. Best of all, Tim and Dawn have the swoon-worthy reunion Office fans had been waiting for for two years. The U.S. version might have picked up this source material and run away with it, but there’s a lot of stilted English charm to be found in these original Office episodes. [Gwen Ihnat]

2. Friends, “The One With The Holiday Armadillo” (Netflix)

Friends always made its Thanksgiving episodes the highlights of every season, so the fact that “The One With The Holiday Armadillo” became one of the most iconic episodes of the entire series feels like a Christmas miracle. Wanting to teach his son Ben (Cole Sprouse, now Riverdale’s Jughead) about the Jewish holiday traditions, Ross is unable to find a Santa costume, so he settles for… an armadillo. “What are you doing here… weird turtle man?” asks a Santa-suit-wearing Chandler, and thus begins one of the strangest and most uproarious sequences of the series. Aside from the never-not-funny sight gag of David Schwimmer in the armadillo costume, the situation leads to badly timed presents and garbled holiday mythologies—including the arrival of Joey (Matt LeBlanc) in a Superman suit, ready to explain how the Man Of Steel flew all the Jews out of Egypt. Add to that Phoebe (Lisa Kudrow) bequeathing increasingly over-the-top presents to Joey in an effort to drive Rachel (Jennifer Aniston) out of his apartment and back into hers; Chandler (Matthew Perry)’s ham-fisted attempts to bribe a restaurant host to snag a quicker table for his date with Monica (Courteney Cox); and a story about a cat eating a tarantula (it doesn’t end well), and this is a perfect addition to any holiday sitcom binge. [Alex McLevy]

“The Strike” is the Seinfeld episode that keeps on giving—from “two-face” to “the airing of grievances,” this late entry is chock-full of terms that made their way into the pop culture lexicon. But the biggest boon of all is easily the Festivus holiday, which was created by Frank Costanza (Jerry Stiller) in a misguided attempt to cast off the shackles of Christmas materialism, and has taken on a life of its own outside the show. As Elaine (Julia Louis-Dreyfus) observes, the austere festivities and father-wrestling make up another piece of the George Costanza (Jason Alexander) puzzle, which, if it were ever fully assembled, would probably resemble that Edvard Munch painting. Eventually, though, everyone finds something to like in Festivus: Kramer (Michael Richards) makes it part of his labor fight with H&H Bagels, while George tries to talk his way out of embezzlement by inviting his boss to the Costanza holiday dinner. The spirit of Festivus isn’t enough to get Elaine a free sub, but it does bring Pulitzer Prize winner Tracy Letts into the mix. [Danette Chavez]

Seth Cohen (Adam Brody) endorses many things across The OC’s four seasons—the songwriting prowess of Ben Gibbard, the therapeutic value of telling your troubles to a toy horse—but his most fierce advocacy is reserved for a hybrid celebration born of his parents’ interfaith marriage. Ladies and gentiles, The OC proudly presents Chrismukkah. “The greatest superholiday known to mankind” made its debut at the midway point of the nighttime soap’s first season, in an episode encompassing many of the attributes that helped The OC seize the early ’00s zeitgeist: A dash of culture clash, a love triangle, the trials and tribulations of young Marissa Cooper (Mischa Barton), secretive land deals, a timely (if not exactly timeless) soundtrack, and the eternal conflict between Seth’s sharp tongue and his big fat mouth. And thus does our intrepid pioneer of winter solstice revelry discover that best-of-both-worlds logic does not apply to budding high-school romance, building to the most awkward Lasso Of Truth moment this side of David E. Kelley’s busted Wonder Woman pilot. To paraphrase the jingly-jangly Ron Sexsmith carol that plays over the episode’s So-Cal slo-mo shopping-mall montage: Maybe next Chrismukkah, Cohen. [Erik Adams]

Futurama’s first-ever Christmas—sorry—Xmas episode gives you the best of both worlds: a touching story that hits on all the usual holiday themes and a wacky showdown with a killer Santa robot. What seems to be a story about Fry’s trip to the future costing him the family togetherness and traditions that many long for during this season turns out to be an even sadder look at Leela’s lonely upbringing and what it means for her holidays. After selfishly whining to her about his slightly less depressing situation, Fry sets out to make it up to his Cyclopean crush but ends up needing rescuing, which brings the two together and the show to its stereotypically sweet Christmas-episode ending. Of course, that also happens to be when Murder Claus explodes onto the scene and turns this “Xmas Story” into a pleasantly deranged action-comedy that comes with its very own twisted carol. [Matt Gerardi]

Keep your SantaCons and ugly-sweater parties: The true meaning of Christmas kitsch can be found in this parade of tinsel-strewn madness led by grand marshal Pee-wee Herman. A holiday-themed, primetime edition of Paul Reubens’ Saturday-morning flagship, the Pee-wee’s Playhouse Christmas Specialtreats holiday cheer as the ultimate upper, as the manic spirit of the eponymous man-child sweeps K.D. Lang into a “Jingle Bell Rock” reverie and provides an appropriately bizarre backdrop to Grace Jones’ digitally slick take on “Little Drummer Boy”—the only recording of that seasonal staple that’s ever been worth a damn. Like Christmas itself, Pee-wee’s Playhouse doesn’t distinguish between high art and low culture, choosing instead to slam them all together into a dense fruitcake of sincerely lively performances, knowingly corny jokes, and a segment where Cher drops by to get the secret word—and that’s it. [Erik Adams]

The odd rituals and traditions of Stars Hollow are always inviting, but in the case of Gilmore Girls’ “The Bracebridge Dinner,” the townsfolk themselves are the guests. When a group of out-of-towners are forced to cancel their travel plans to the Independence Inn for a lavish Elizabethan feast, Sookie (Melissa McCarthy) and Lorelai (Lauren Graham) decide not to let the preparations go to waste, inviting a good portion of their neighbors (along with Lorelai’s parents) to sit down at the lengthy dinner table and enjoy the show. So while everyone savors the image of Jackson (Jackson Douglas) stiffly delivering pronouncements in his regal garb, festive drama is afoot. Richard (Edward Herrmann) has quit his job without informing Emily (Kelly Bishop); Jess (Milo Ventimiglia) steals a private sleigh ride with Rory (Alexis Bledel), who continues to insist she has no interest in him and is happy with Dean; and Lorelai has a minor panic attack about not wanting Rory to spend any of her precious holiday break with her father and his new girlfriend. Of course, this being Gilmore Girls, all the drama is handled with mile-a-minute banter and effervescent wit, meaning no argument is more than a few seconds away from another pop culture reference. It’s brimming with soapy cheer—and a snowman-building contest that receives some last-minute meddling. [Alex McLevy]

Kimmy Schmidt (Ellie Kemper) missed out on a lot of holidays in the 15 years she spent underground in that bunker, and in season two’s “Kimmy Goes To A Hotel!” she’s celebrating Fake Christmas to make up for lost time. “I think this is cute. And a little weird, like a bunny with human teeth,” says Lillian (Carol Kane) when the episode opens on Kimmy topping her tree. The holiday starts off with about the greatest gift Kimmy could ask for: evidence that Dong (Ki Hong Lee) still has feelings for her. The two then rendezvous to celebrate Fake Christmas in the Poconos, running the halls and ransacking the snack machines of an old abandoned hotel/federal raccoon sanctuary. In the end, their night together lands Dong in immigration trouble, while Titus (Tituss Burgess) uses his own Christmas Carol storyline—or, in his words,“the group’s only adventure”—as an excuse to quit his job, and yet, the episode closes with the two gathered around the piano with Lillian to celebrate Fake Christmas exactly how you should, “with your fake family” under asbestos snow. [Kelsey J. Waite]

Christmas has been embedded in South Park’s DNA since The Spirit Of Christmas shorts that first launched Trey Parker and Matt Stone’s careers, but Mr. Hankey actually predates even that. Parker and Stone first conspired to create a cartoon around the anthropomorphic, happy-go-lucky turd—based on a traumatizing story Parker’s father had told him during toilet training—and later even pitched a proto-South Park called The Mr. Hankey Show, with the talking poop as its main protagonist. But it wasn’t until the ninth episode of Comedy Central’s non-shit show that Mr. Hankey finally got to make his big splash, popping out of the toilet to teach the town about the real reason for the season: just being happy for one godforsaken day on this miserable planet and baking some cookies. It’s a secular, “sick little monkey” spin on A Charlie Brown Christmas that’s deservedly become a holiday perennial in its own right, skewering the annual freak-out over religious sensitivity that tends to suck so much joy from the holidays, while at the same time providing some of the catchiest, dirtiest, Christmas-ish songs to ever be added to the canon. [Sean O’Neal]

The Christmas Carol trope is a plot TV shows have turned to time and time again, but never in such an endearing fashion as WKRP In Cincinnati. In the show’s season-three holiday episode, radio station boss Arthur Carlson (Gordon Jump) is ready to stiff the staff on their year-end bonuses. Then he accidentally eats one of Dr. Johnny Fever (Howard Hesseman)’s magical brownies, and is visited by those spirits of Christmas Past, Future, and Present. The past view may be the most endearing, as we get to see a young and bright Les Nessman (Richard Sanders) as an office boy, alongside some classic salesmen from an earlier media era. But the bleak future Christmas predicts a stark, mechanized radio system, with no DJs at all. Naturally, a chastened Carlson wakes up in a much more generous mood, cementing one of TV’s best workplace families. [Gwen Ihnat]