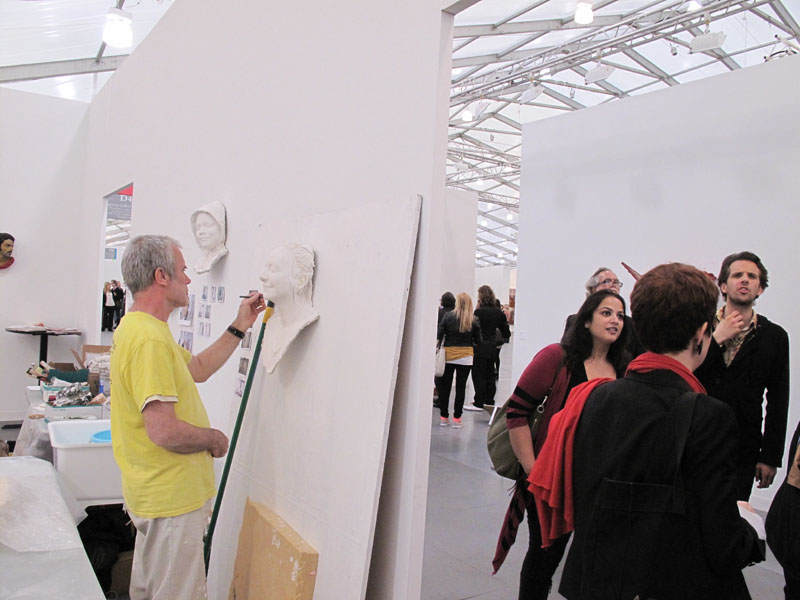 
Frieze Art Fair made it’s debut in New York on Randall’s Island, with the VIP opening on May 3rd and is open to the public from May 4th-7th, 2012. The fair, stemming from London, has made its entrance into New York and not long after the onslaught of fairs just a short month ago (the Armory, Volta NY, Scope, etc.). Not knowing exactly what to expect, hundreds of New Yorkers and those who have traveled from all over the globe for this event, made their way to Randall’s Island via various transportation options including a ferry running from 35th street in Manhattan, shuttle buses, and also just the basic taxi ride. The blossoming of spring has the island booming with greenery; tree buds exploding, grassy green pastures, and the hue of the nearby East River shifting in the natural and motorboat elevated tide. Pulp Lab invited Brooklyn based art writer and seasoned art world maven Katy Diamond Hamer to provide an in situ perspective on the market vibe, the crowd, and the contemporary art which has been brought from cities all over the globe.

Upon first entering the large, gleaming white tent, one is met with the billowing strips of fabric that aren’t unlike the exaggerated rib cage of an extinct, prehistoric mammal. Inside the North entrance, the room opens up and unlike the Armory, is spacious and airy. The booths are evenly spaced and not overly saturated with artwork. The first booth encountered was that of New York based artist John Ahearn. Ahearn, part of Frieze Projects, curated by Cecilia Alemani, has a booth where he has set up a temporary studio space and has accepted commissions allowing him to work in-situ for the duration of the fair. Both John and his partner Rigoberto Torres are making plaster cast portraits of anyone who requested a piece. The interested party was responsible to make a down payment of $3,000.00 and will end up with his/her painted bust, according to the artist, whether they like their likeness or not.  In the booth are a series of portraits called the South Bronx Hall of Fame dating from 1979. The series of works are a range of characters from friends to family members. Each piece captures a personality and resonates with not only a time, but a community of people. Ahearn also has taken part in the Head Start Program in the Bronx, located in the lower levels of the Andrew Freedman House, in collaboration with the Bronx Children’s Museum. He is interested in merging community and social issues along with art making, bringing familiar faces inside and memorializing them in painted plaster. The artist talks about his project as a method and way of slowing down and getting to know someone. Ideally he said, I would prefer at least two hours with every subject, the personality will reveal itself in the finished product. 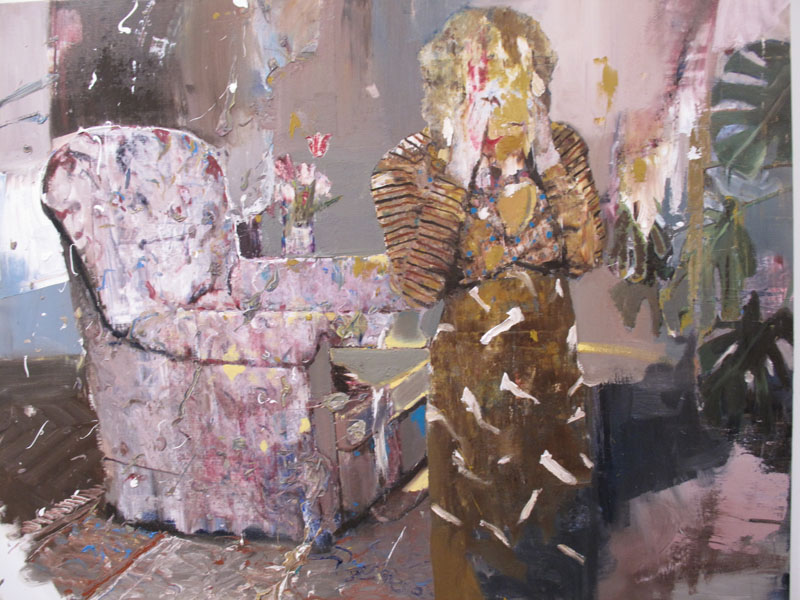 
Outside the realm of social art is the world of commercial art, for which the fair exists. This year, many of the booths are filled with lush, rich paintings. Galleries, both domestic and international, present a variety of works on canvas, ranging from contemporary representation to abstraction. There are several familiar, recognizable artists (for those with a pulse on the contemporary art world) and many lesser known artists as well. The selection is refreshing. Artists like Adrian Ghenie, exhibiting with Galeria Plan B in Berlin is an example of an artist making work following a long historical tradition on painting the figure. However, in a contemporary way, he negates, or cancels out several parts of the figure and the environment, allowing the viewer to fill-in the blanks with his or her personal experiences or interpretations. 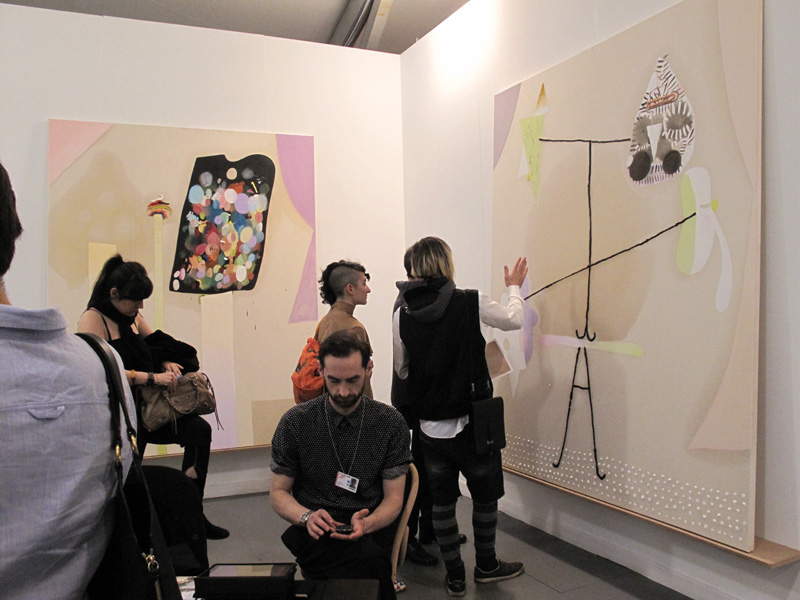 
Another painter making marks that appear somewhat familiar, however foreign, is Florian Meisenberg, from Kate MacGarry, London. These works, if more obscure in nature, conjure up and utilize a familiar painted language, similar to that used by Kandinsky, but still fresh and new. Berlin based, Contemporary Fine Arts, is showing large scale paintings with biomorphic shapes, similarly diagrammed like an exaggerated paint-by-number; however, with gradations and areas of metallic sparkle interwoven with traditional medium. Gavin Brown, based in the West Village, NY not only has paintings on display, but actor/director Mark Ruffalo was present, cooking sausages over a grill.  Not an average occurrence in an art fair, Ruffalo is the founder of Water Defense and is collaborating with the gallery to present and raise awareness towards clean energy and safe drinking water on a global level. 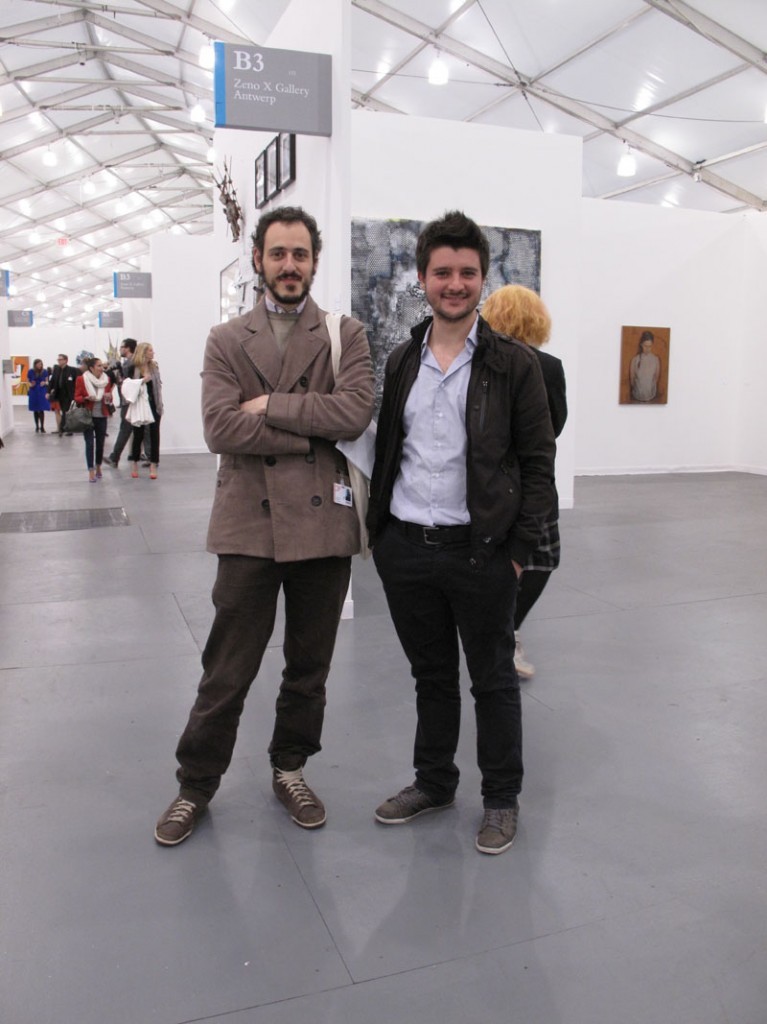 
Other galleries to look out for include, Beijing based Long March Space showing video by Ran Huang, Paris based Galerie Jocelyn Wolff (*note the work of artist Guillaume Leblon), and Corvi-Mora, based in London and showing various artists including a sculptural installation piece by artist Roger Hiorns, which is emitting foam, not unlike the work of another London based artist, David Medalla.