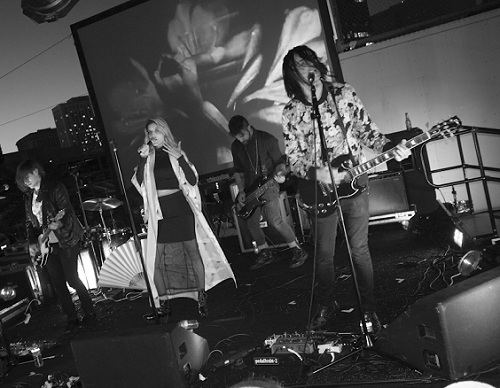 On the heels of the final installment of its hugely successfulEngagement Party series, the Museum of Contemporary Art Los Angeles (MOCA LA) unveiled PLAY MOCA, a new multidisciplinary festival to celebrate the diversity of emerging creative talent in Los Angeles, featuring a three-night event which included live musical performances paired with visuals projected onto a temporary installation. MOCA director Jeffrey Deitch tapped L.A.-based band IO ECHO and their record label IAMSOUND to curate the festival after hearing the band’s score for Harmony Korine and James Franco’s art/film project, REBEL, which was presented by the museum. The trend toward such types of collaboration informed the spirit of PLAY MOCA, as Deitch noted, saying, “there is increasing interchange between artists, musicians, and designers. It is exciting to present these collaborative performance projects that reflect the new creative convergence in Los Angeles.”

Ioanna Gika of IO ECHO agreed, adding that “any city can be conducive to multi-disciplinary collaboration if it harbors people who welcome the possibilities of what might happen if you open yourself up, give, and listen to others … Just look at the majority of museums in L.A.; they [all] host music series. They are open to it, and have done it.  And to me, that’s a testament to the willingness to cross-pollinate art forms.” 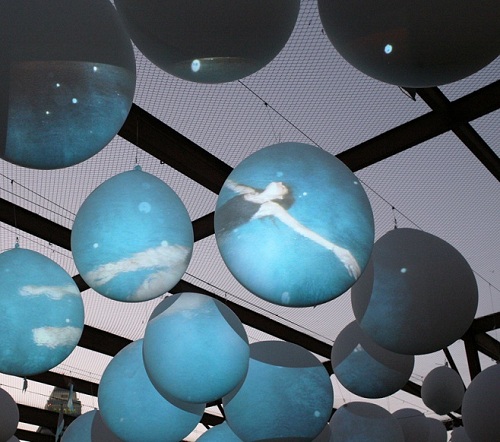 PLAY MOCA, which was held in the courtyard of the Geffen Contemporary –conveniently allowing guests free access to the current exhibitions indoors – showcased a stellar lineup of talent that in turn attracted a crowd flush with young artists, filmmakers, musicians, designers, and fashion darlings. The first night of the series offset the musical stylings of Salem, IO ECHO, and a DJ set by Health with visuals by Drew Barrymore, including footage from the Best Coast music video she directed starring Chloë Moretz. For the second night, recent L.A. transplant Benjamin Millepied projected an underwater dance sequence in which members of his nascent Los Angeles Dance Project swirled in custom Rodarte to the haunting tunes of Zola Jesus, Active Child, and a DJ set by Ariel Pink. The final evening of PLAY MOCA paired performances by Cults and Lord Huron, along with a DJ set by Taken By Trees’ Victoria Bergsman, with pieces from Emmett Malloy’s groundbreaking surf films. The transportive atmosphere of each of these evenings was largely indebted to design collective COCO’s nuanced installation, an environment which consisted of white oversized balloon-like spheres suspended overhead. 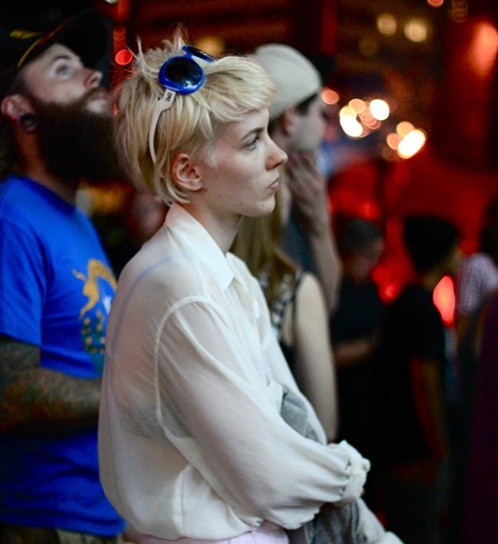 In selecting these artists, Anh Do of IAMSOUND explained, “We wanted to find artists that embraced the visual side of their creative output, and combined that with a search for artists that represented a variety of genres. The musicians needed to be open to working within the outdoor Frank Gehry-designed space as well as collaborating with the visual artist we paired with the musicians for each show.”  In addition to musicians and artists, Do noted that IAMSOUND made sure to include elements of design, bringing onboard COCO, “an L.A.-based design firm, including alumni from SCI-ARC, Los Angeles’ internationally renowned architecture school, which helped transform the museum courtyard into an enveloping and otherworldly performance space.”

Pulp Lab caught up with Victoria Coaloa and Colin Sieburgh, the duo behind COCO, which was tasked with creating the site-specific installation to serve as the visual canvas for PLAY MOCA.

What was your assignment for this installation, and how much did you know going in?

Colin Sieburgh (CS): Our first meeting with IAMSOUND was actually on-site, without knowing very much about the project. IAMSOUND wanted us to transform the space and create an identity for the festival. We were given a lot of freedom. The question was: how can we transform the overall space and simultaneously create a surface for the visual artist to project their art onto?

Titled “invertedLA”, how did Los Angeles inspire this piece?

Victoria Coaloa (VC): That’s an interesting question for us to answer, since we internally battled with the title for a bit. Los Angeles was one of the two major drivers for this installation, the other being the concept of “play”. We originally designed the piece to represent the inverted landscape of L.A. with valleys and hills made up of giant balloons. As the project developed, other factors began to affect and transform its appearance and geometry; factors such as budget constraints, site conditions, heat, wind, etc. We felt that the element of play took over and the literal landscape became secondary. Nonetheless, we chose to keep the name of the project as a trace of our original conception and think it still applies in a new way. We kind of got turned upside-down ourselves!

Any ideas you threw out before deciding the final nature of it?

CS: Yes, with all of our designs, we go through an iterative process, where we develop multiple conceptual schemes before deciding on one. We presented three ideas to IAMSOUND, who we worked together with on choosing the most appropriate and exciting one for PLAY MOCA.

Frank Gehry – his studio was behind the renovation of the Geffen Contemporary, and he was also commissioned to improve the acoustics of the Hollywood Bowl, whose former fiberglass spheres somewhat resemble your “invertedLA.” Was this 1980s Gehry connection present in your minds?

CS: We were very excited to have the opportunity to temporarily transform and interact with Gehry’s piece. While there wasn’t an intentional reference to his work, we were aware of the context of both the Geffen renovation and the Hollywood Bowl spheres.

At what phase of the conception/creation/installation process did you see the visuals and hear the music?

VC: We initially didn’t know which artists were confirmed for the three events, but were familiar with the direction that IAMSOUND wanted to go in. Our collaboration with the artists varied; in the case of Emmett Malloy, we met very early on to discuss the project’s concept. In the case of Benjamin Millepied and Drew Barrymore, we sent them a drawing package with visuals and diagrams to orient them on the aesthetic of the space and its potentials as well as limitations. In all three events, we saw the visuals for the first time during the event itself. It was interesting to see how the various approaches yielded completely different results. Emmett’s piece was very well choreographed, in sync with the movement of the balloons, the light quality of the space, as well as the music being played that night. With Benjamin Millepied and Drew Barrymore’s work, we feel there was a strong sense of mystery somehow; sometimes the imagery felt dislocated with its surrounding environment which caused intense moments of surprise.

VC: It was really fun! We were lucky to have a great team of volunteers from local architecture schools and MOCA to help us with the physical portion of the installation. Both Colin and I teach at USC, so a lot of our former students showed up to lend a helping hand. The installation somehow acted as a closure or practical experience for them where we got to share the transformation of a piece from the classroom to real life. The process was a great learning experience in which we really had to adapt and adjust our design to real time.

Did anything magical happen that you weren’t expecting?