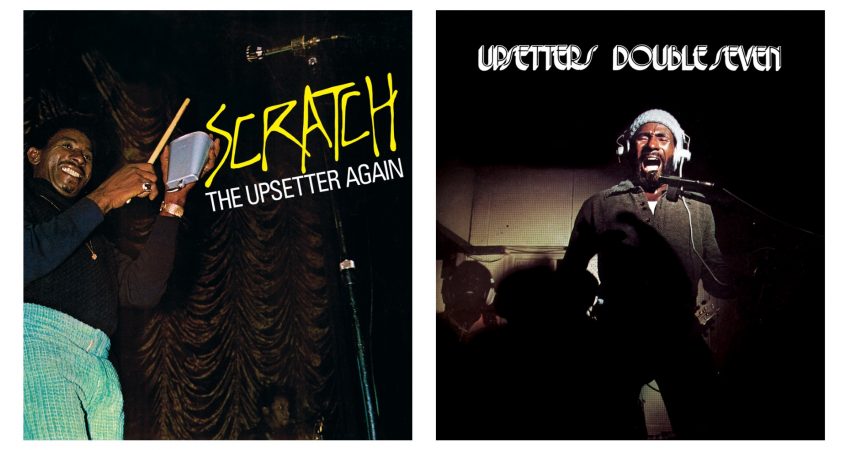 The work of Lee “Scratch” Perry and his group The Upsetters are entering the archival ranks of San Francisco based label Superior Viaduct and their new imprint Antarctica Starts Here. Double Seven (Trojan, 1973) and Scratch The Upsetter Again (Upsetter, 1970) will hit record shelves over the next month, including liners by reggae historian David Katz and high-quality vinyl prints. The two releases show the kind of wide-ranging styles of Jamaican roots music and innovation Lee “Scratch” Perry was melding in the ’70s, launching multiple albums a year and establishing one of the most extensive archives of Jamaican music in the world. There was a spiritual and diverse sense of philosophy and experience embedded in every album from this period. These albums are glowing examples of that light.

Double Seven was one of the last projects Lee “Scratch” Perry started before creating Black Ark Studios, arranging visionary reggae music that encompassed funk, soul and dub unlike anything before it. There’s an abundance of recording styles, gear and formats used across the record, with moments showcasing the many vocalists present, the diverse range of synths, and the heavy terrain of experimental reggae music influenced by the worlds of Funkadelic, Jimi Hendrix, and Sun Ra. From heavy processing through delays to unique cut and pasting techniques, Lee “Scratch” Perry went the extra mile on crafting Double Seven as much of a studio experiment as it was a continuation of reggae rhythms and soul.

Released three years before Double Seven, Scratch The Upsetter Again was a lesser known work and a reflection of the music permeating on radio waves through Kingston and the studio location he held there. By the time 1970 hit, The Upsetters were beginning to deliver music through London and Jamaica at a rapid rate, keeping dance floors pulsing and disc jockeys stocked. Hints of the ska and R&B sound of the ’60s are all over Scratch The Upsetter Again, running out of the box with unique fusions from the island for a record released in 1970. Originally hitting the streets on the Trojan Records subsidiary Upsetter (active from the late ’60s to the mid-70s), it serves as a time capsule reflecting the turning point of reggae’s explosion in popularity during its most transitional phase.

Considering that these albums were originally sourced from the Trojan catalog, this is a promising sign in seeing more proper reissues from this extensive archive of Lee “Scratch” Perry material.

More information and purchase links for both titles below:

The Upsetters – Waap You Waa (from Double Seven): https://www.youtube.com/watch?v=trseh1Bs_8g

The Upsetters – “Soul Walk” (from Scratch The Upsetter Again): https://youtu.be/PkQvHDXcIoY