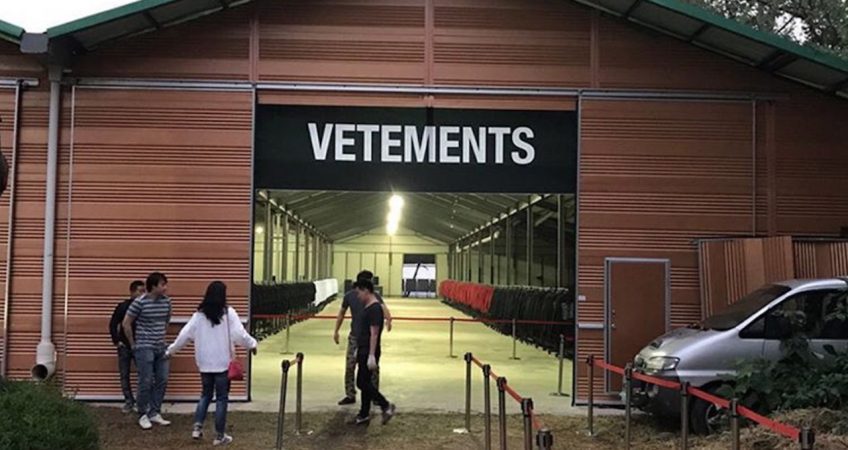 ‘Official Fake’: The Vetements Approach to Entering a New Market

Vetements knows how to start a fashion frenzy.

The fashion brand led by Demna Gvasalia, also the creative director of Balenciaga, sprung up seemingly out of nowhere in the past year with its street-inspired take on luxury fashion. Its pared-down designs and reimaginations on classic American brands (Champion, Hanes and Reebok among them) have created a cult following of fans willing — crazy enough? — to shell out $200 for a DHL t-shirt that even Gvasalia has said he wouldn’t buy.

Now, while based in Paris, Vetements’ brand of cool has gone global. In tandem with Seoul Fashion Week, which begins October 18, Vetements hosted a garage-sale themed pop-up shop on Monday with Matches Fashion in a warehouse two hours outside of the South Korean capital. The shop was the brand’s first step into the South Korean market, and it used its Instagram influence, a strategic e-commerce partnership and a personalized collection to catapult its regional debut to success.

As the global luxury market becomes increasingly important for an industry facing lackluster growth, here’s what other brands can learn from Vetements’ approach to stepping into a new country.

Tease it on social media
On Instagram, Vetements began promoting the sale a week in advance to its 850,000 followers, using nondescript imagery and scarce detail. The posts only shared enough information to get people excited: the name of the collection, “Official Fake,” the collaborator Matches Fashion, and the time, date and city. The venue was listed as a “secret location” until a day ahead of the sale, when the address was revealed in a new Instagram post. In order to find it, fans had to follow along through a week of promotions to get the all the information.

Throughout the posts hinting at its Korean debut, Vetements focused on different elements that kept followers guessing. In one, a new Reebok sneaker launch was announced; in another, the Korean launch of the Vetements “Summer Camp” book, which is how the label refers to its seasonal collections, was teased. As the event grew closer, the “Official Fake” capsule collection surfaced on the promotions, with little detail.