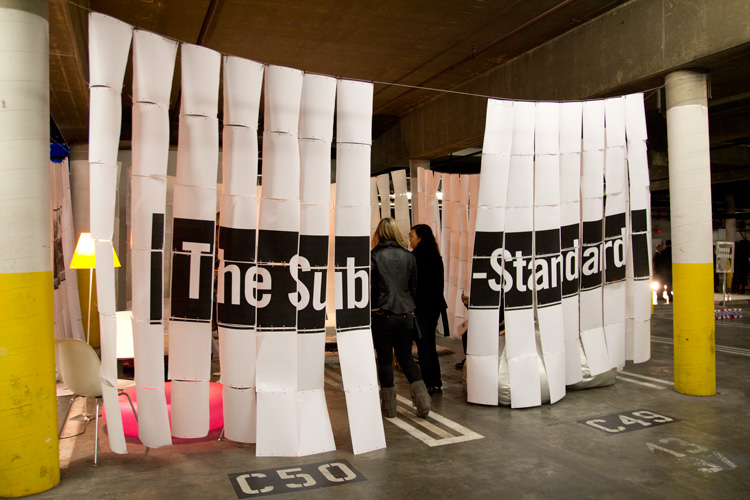 On Tuesday, 1/24 evening, no one cared to be inside the bar at West Hollywood’s The Standard Hotel. Instead, patrons opted to grab a drink in the underground parking garage and observe the Art in the Parking Space. This year-long series of performative installations are a part of Pacific Standard Time’s (PST) Performance and Public Art Festival that is curated by Amanda Hunt of LA><ART featuring Warren Neidich and Elena Bajo’s cross-collaboration with multiple artists.

As artists and long-time partners, Neidich and Bajo, invited other artists to create temporary and ephemeral artworks in designated parking spaces of the first floor of the hotel’s garage. In the spirit of the PST initiative, this artistic dialogue fused a sixties vibe with expressions of cultural parameters that define contemporary Los Angeles living. Neidich concedes, “the ideas and dreams that drove the sixties, cars, suburban living and individuality have all been realized and some have even become nightmares. The freedom the Los Angeles highways once represented has now turned into one giant parking lot.” The participating artists all seemed to be very thoughtful and most work uniquely addressed histories, politics and social practice as opposed to making commodities that would sell. This accounts for the beauty of performance art. 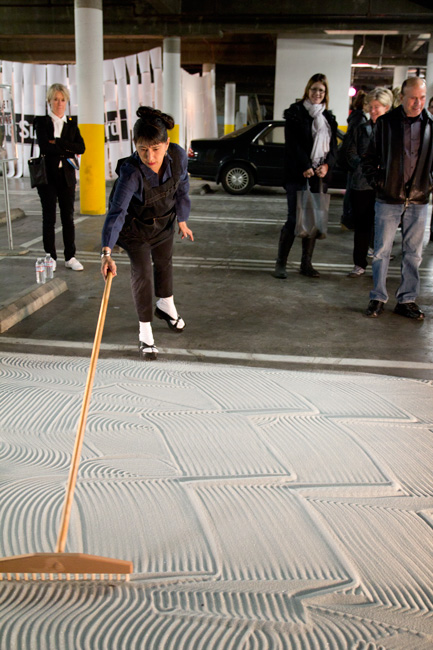 Sydney Cooper explained her raking ceremony as an ode to the creative forces in her life – her father, artist Ron Cooper who worked with materials reflective of light and surface and her Japanese great-grandfather who worked as a gardner after World War II. 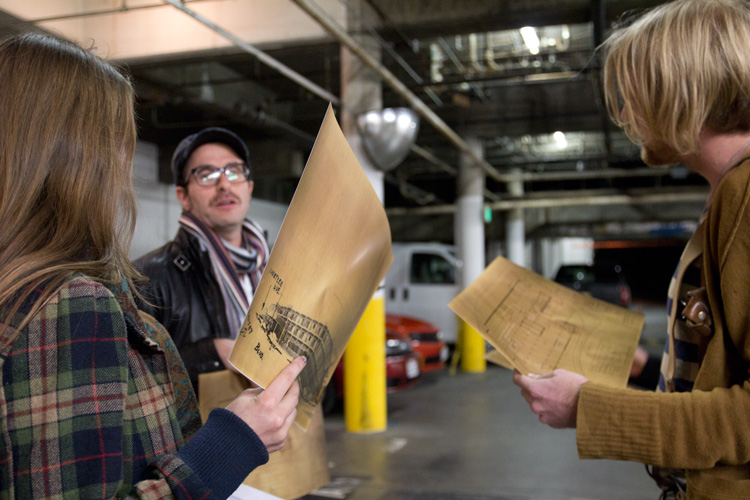 The research-based Untitled Collective presented the hotel as a sort of archeological site by re-mapped the parking lot and superimposing the original floor plan of the Golden Crest Retirement Home, which predated The Standard from 1977 to 1998. The collective conducted guided tours during the event as Seth Wiener explained the performative as exploiting “the retirement home as the antithesis to the youth culture associated with The Standard. ” The group states that most of their works are site specific inspirations. 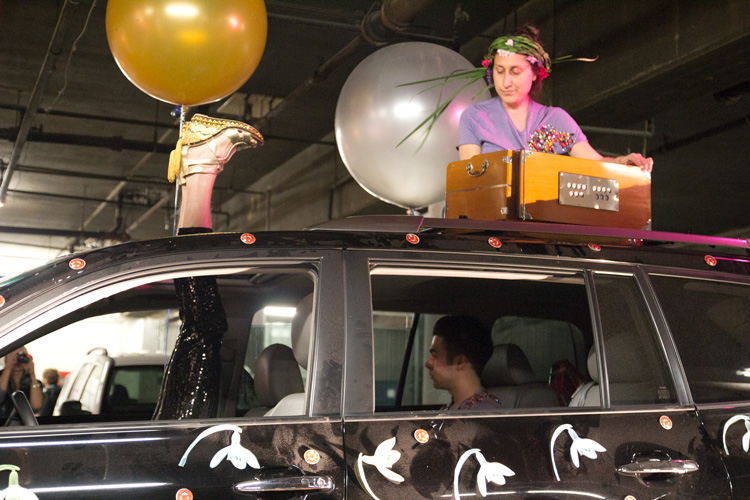 Gracie DeVito, daughter of Danny DeVito and Rhea Perlman, performed the next rendition of Coolidge Night One, first performed at Perform! Now! in Los Angeles. DeVito and her cohorts converted her SUV into a 21st century music box, using the roof and sunroof as their stage, performing a collection of songs. 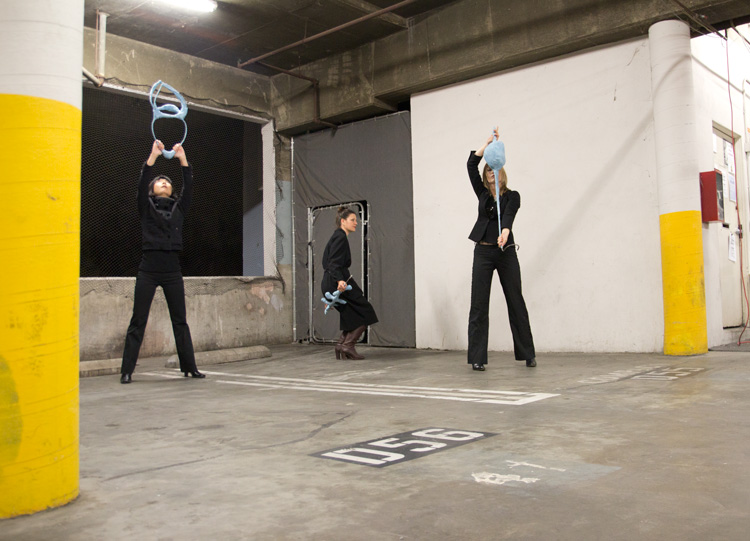 Krysten Cunningham extended and relocated her ongoing performative project 3′ to 4′, in which dancers created quasi-rituals and used the parking spaces as areas to divide the limitations of the conditions of geometry while Johanna Reed’s intention was to break the world record for the maximum number of people who can fill a single parking space by simply luring patrons in with free beer. 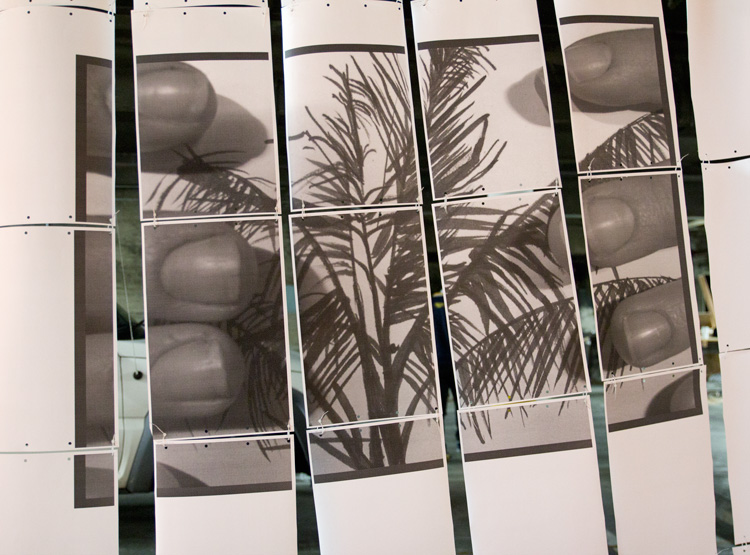 Artists Tova Carlin, Ania Diakoff, and Katerina Llanes borrowed or as Llanes described, “parasited” all the furniture from the hotel to re-design a faux “real” room of the hotel. Entitled The Sub Standard each mined their different interests and applied their talents to the contrived details of the room. Diakoff re-inverted The Standard’s upside-down logo and made stationery to accompany while Carlin produced images of hands holding a palm tree and an abstracted video camera to decorate the paper walls. “The Sub Standard is a true collaboration,” Diakoff proclaims, mimicking a “culture of reproduction.” 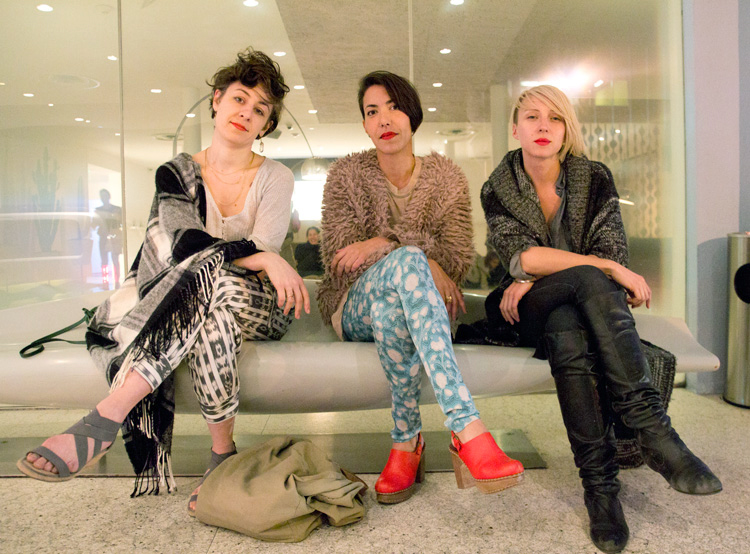 When asked about their thoughts of the project as a whole, Llanes expresses her enthusiasm and states, “the art world was consumed by the art market and often times it’s actually antithetical to what artists are trying to do… it’s important to differentiate ourselves from that bubble. We need to build community.” 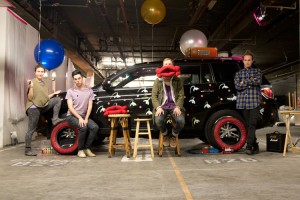