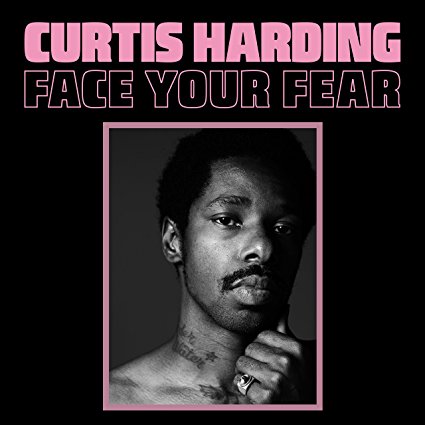 On the new release from Atlanta-based musician Curtis Harding, compositions rooted in rock and soul get a bit more engaging when the genre borders merge.

As displayed with his 2014 release “Soul Power” and the current “Face Your Fear”, Harding’s’ lady killer falsetto is always worth the price of admission. But when a melody is stretched beyond shimmery 60’s soul and begins to move into Norman Whitfield type psychedelia. Or manifest darker tones through a moody Portishead type filter, an earthier style of vulnerability comes into focus. One that resides above and below Harding’s’ falsetto.
All those years of paying dues by singing backing up for Cee-Lo Green on tour, coupled with playing lead singer and drummer in a garage band with The Black Lips’ Cole Alexander foreshadowed this nuanced moment in Harding’s’ career.

But make no mistake, his rave-up “grit and shine” soul numbers never disappoint.

“On and On” is a driving stirrer with full-tilt horn charts. And the infectious positivity that swirls about in “I Need Your Love” evokes all the pop, crackle and magic that can be found at a vintage 45’s DJ underground soul party. These two songs would line up nicely next to any retro-soul nugget from the mighty Daptone record label.

It’s when Harding finds the proper “smirk and smiles” attitude to compliment the dystopian type blues on the Danger Mouse produced “Wednesday Morning Atonement”.  He evokes a precise amount of vocal pathos that effectively communicates the sour of a situation, with the sweetest upper register approach.

On the song “Face Your Fear”, a whisper enunciation of” just be cuckoo when it meets you/don’t be giving up” contrasts beautifully with the twisting “self-aware” string chart. These style points display the versatile acumen on this 11-song release. Ensuring Harding, and his swiss-army-knife full of talents, cannot be pigeonholed as a one-trick revue.

#High-Octane: Q+A with Jesse Martinez from “Made in Venice”