We were lucky enough to see Seattle band J GRGRY, led by frontman Joe Gregory, at the innaugural Upstream Fest + Summit last week. We caught up with Joe after the show, where he spoke with us about his musical influences and the long journey to their new EP, Gold Teeth + Glass Eyes.

PL: Can you tell me about the band and how you got here?

JG: It’s been a long road to get here but yes, the band is amazing. Robert Cheek, guitarist and engineer, Ryan Leyva, bass, Davey Brosowski, drums; they’re all just a seasoned, super group of people. Amazing people but musicianship across the board, just off the charts.

JG: So good, I get so excited to rehearse. I’m just like, “Yay! I get to play with these guys.” I mean it really is like Christmas Eve for every time we get to rehearse.

PL: And it’s your label?

Joe: It’s- yes, I mean just self-released but we’re putting it out on our own. The thing for me is that the long road was I had three major label record deals that fell through and in a nutshell, lots of torture through that. So this was like- I’d made three full records for Hollywood and Geffen and Atlantic and they never saw the light of day. I was never able to release any of the music, I don’t have any of the music. So it is that story that we’ve heard so many times before. But this time I was like, you know, if I have to eat rice and beans, I will eat rice and beans so that I can put my record out when I want to fucking put it out, you know what I mean?

PL: How to navigate all that.

PL: Yes, well that’s an interesting time and I think of the Upstream festival and being here in Seattle with all the technology and music. So I’m super interested in where  these things meet and the fact that you’re self-produced and self-creating. What about your visuals, is that all you too?

JG: That’s Amy Billharz. She does our visual projections and she’s amazing. We’ve worked with her for about a year.

JG: Similarly, our makeup artist, Jon Barber, who I work with exclusively. We actually just got back from New York two nights ago. Refinery 29 flew us out for a shoot. 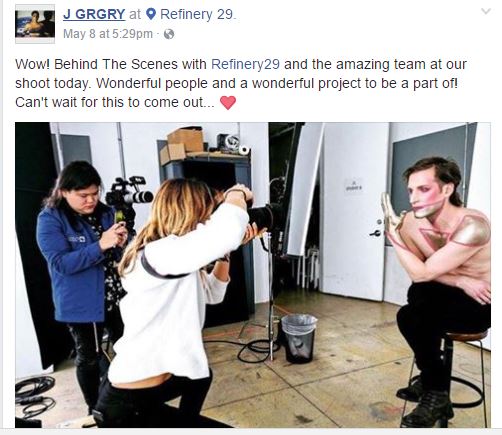 PL: Oh cool, I think I saw that on your site.

JG: Yes, it’s going to be a really amazing piece that we’re going to put out in June.

PL: We’ll look for that. On glam, do you put yourself in that world? What can you tell me about your physical persona?

Joe: It’s been an evolving process obviously but without getting too loaded about it, I think that

“Music has this amazing power of being able to open up uncomfortable conversations and making things that aren’t always safe to talk about.”

As a kid, growing up in Seattle in the ’90s, seeing Kurt Cobain in a dress was really powerful for me and then seeing Michael Stipe in eyeliner. Then seeing Grace Jones and Freddie Mercury and you further and it’s like, “Wow,” and so for a very queer kid living in a religious environment, this was like a lifeline to me.”

PL: What about Bowie and going back to those icons? Was it less real because he was from a different generation?

Joe: Right and I mean honestly, Kurt Cobain introduced me to David Bowie. I was about 13 years old when- you know, “The Man Who Sold the World” was performed on MTV Unplugged. So, those kind of things, when I was approaching the concept of J Grgry as a band and doing this record with my trusted friends and associates, I just thought, there is a time for more depth to what we’re doing and we’re a rock n’ roll band and we can play rock n’ roll with the best of them but we can also- you know, we’ve got our head on our shoulders and we can open up dialogue about gender fluidity and gender identity and things that are at risk right now.

PL: In your lyrics that’s evident too. I mean- or is it- you write all the songs.

JG: I write all the songs yes, and the lyrics deal a lot with my alcoholism and depression and those things.

PL: Which I understand you’ve overcome?

JG: Which is the hardest thing obviously ever, every day but a huge thing and my life is so much better because of it.

PL: Do you practice yoga or anything?

JG: I do, every single day.  I wake up at 4:30 AM every morning to do a self-care routine and I meditate and I do about a 45 minute practice. I like to get deep stretches.

JG: But the meditation and the breathing, it-

PL: It saved your life.

JG: It saved my life, it really did.

JG: I would say that yoga is what did.

PL: So what else can you tell me about your new album, Gold Teeth and Glass Eyes?

JG: It’s a nine song EP and it’s kind of in the pop model of three minute, 30 second songs. That’s kind of my jam. Growing up with- I just loved soul music. I mean the Supremes, Aretha Franklin, it’s like two and a half minute songs, it’s like you’ve got the bridge, the chorus and the verse and it was all great. So that really speaks to me as a songwriter.

JG: We’re going on tour and we’ve got a bunch of festival dates, Bumbershoot included. That was a childhood dream come true.

PL: Wow and this is your first tour with this band and this line up too, right?

PL: You guys are going to kill, do you realize that?

PL: So what are your plans for the band? Do you want to continue to self-create and follow the new model of creating it all and owning it all, and, frankly, waiting until they come running to you, which they will.

JG: I’m pretty sure that I’m not even open to them when they run to me. And the bottom line is that I don’t need a million dollars, I don’t. I just need to be able to eat and sleep safely and create and I’m good. And if that’s a fan base of 5,000 people, that’s awesome, then I’m super happy.

PL: You’re going to kill, do you realize?

PL: It’s going to be five million, you’re going to kill it. You’re also spiritually and physically ready for it. The fame, right.  So, are people surprised that you’re from Seattle? Based on your stage persona and look?

JG: Exactly, so there is a lot more than that, yes. The one thing I will say is that when we go on tour, the fans are a lot different in different cities. And I’m guilty of this when I go to shows, I’m very reserved, I’m like in my own little bubble but fans outside of here seem to be a little more raucous which is kind of fun.

JG: England is actually- the first time I played in England I was like, “This is amazing.” Kids like just hanging off the rafters but yes, its good times.

PL: Cool, well it’s getting so loud here. Is there anything else you want people to know about you or the band or what’s coming up?

JG: We’re just so excited. I mean I can’t- I don’t know if I can even express-

PL: Are there a couple of favorite tracks that you just love?

JG: The track that we closed with, Floodlands, is- I often leave the stage because every time I sing it, it hits me.

PL: That’s the one I picked from listening to all of them too, just as like the top of the playlist I’m going to put together on you guys for the piece. So it definitely speaks to the heart.