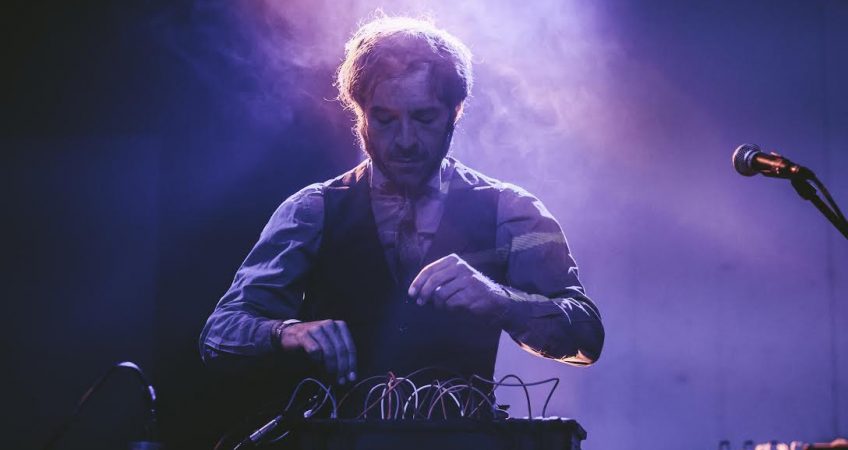 Alfred Darlington, a deep-rooted architect of L.A.’s beat scene, has tinkered with these limits since 2001.  Recording under the well-respected moniker of Daedelus, his brand of left field electronic composition—hip-hop, r&b and jazz blasted through an EDM filter—was an early tent pole in the post-genre beatmakers camp in Southern California.

Daedelus was gracious enough to give us his sandwich thoughts and taco feelings on a number of subjects before heading out on tour.

AD: Thrilled, overjoyed, elated, expletives intentionally left to the imagination. It isn’t every day that I get to release new music, but I so wish it was.

PL: Thoroughly blown away and chuffed by the airy dreamscapes and overall delicately sculpted musicality with Taut. With this being your 19th album, you employed a different method of recording. Could you explain?

AD: Belief that the canvas is as important as the painting when you get down to it. The shift to Ableton’s Live for this album meant inevitable disruption of workflow and created wonderful new problems to obsess over. I don’t want it to sound as if I didn’t know what I was doing, but I think you can hear the discovery in the tracks.

PL: You put out a mixtape last year on Dome of Doom called “Wears House” that was revisionist rave, breakbeat and jungle that included tracks from ’91-’96 as well as originals from you. The holy shit moments on tape were non-stop.  What was the impetus for doing that rave cassette mix in 2017?

AD: Thank you! There is memory space held by a generation which experienced Rave first-hand and the younger unearthing that era on their own terms. That friction between authentic experience and adopted history. I wanted to comment on this with the only way I know how, with much mulching of audio. In fact, all the Rave included wasn’t so much adopted from vinyl, but rather taken from recordings of underground events during the era by possibly addled participants… Hence the lo-fi quality gleaned from that documentation which I then remixed, taking in piecemeal or whole cloth for the mixtape.

PL: This past April, The New York Times mentioned the prolific Stargate Music release by Ras G and the Afrikan Space Program, in their playlist section. The deserved respect, I must add. Producers in the beat scene know who Ras G is, how he gets down, and why he is far ahead of the curve. What I wanted to ask you, being a veteran in this field of electronic music. How would you define the beat scene and what does it mean when The New York Times is covering it?

AD: The beat scene has always been shy from definition, partially because it was created against. Against the rigid tempo associated with electro, dubstep, or trap. Against the beats being quieted under vocal. Against sound-a-likes. The heat was in a track that sounded nothing like anyone else. And Ras G was unlike anyone else in the circle at Sketchbook or later Low End Theory. Now that’s looking back through long lenses, with break out stars and overground attention I think you get lumping in. It’s brilliant that Ras has been vital to the sound and scene. I feel like coverage has looked at the Beat Scene always sideways, with a story first and the subject second, but it’s been an inward facing culture from the start so I don’t know if it’s ever really mattered. Wonderful to see Ras getting his though!

PL: What are your thoughts on vinyl and cassettes coming back into vogue?

AD: Increasingly mixed reactions. I love the culture of digging. I am such a product of personal archaeology through collections that have been buried in a record bin waiting to be dusted off. However the pricing out of inexperienced ears is a shame, it steals away a generation that should be reckoning with the albums on their own terms. Cassettes are a nice solution to this for audience and artist, but I don’t like how they can be sidelined in some stores as oddities or novelty. I want my world to be fully embroidered so to speak, context and artistry everywhere, and on my music most of all.

PL: What was the last record left on your turntable? Why were you playing it? If there is a special history with it, please explain.

AD: Honestly my own soon reissue of “Of Snowdonia”, actually never before on vinyl so feels extra special, but I don’t believe that’s the spirit of your question. More for listening pleasure I’ve been revisiting my Brazilian vinyl with extra ears towards the vocalists, so Anna Margarida’s “Anna” was my last to be given a long play and my world was better for it.

PL: Last question and most important for any musician. What’s your favourite sandwich shop near where you live? What do you order? And why?

AD: It being LA I’ll give you my sandwich thoughts, but also taco feelings. Go to Dune in Atwater, order the Pickled Beet Sandwich, it’s too much so save half for when you are hungry tomorrow. A little further away Sonoratown is in DTLA’s Fashion District, it’s only lunch so struggle against the traffic and be rewarded with an absolutely astounding machaca chimichanga or flour tortilla chorizo taco.

« Pulp Lab Playlist // May 2018 – Featuring Binker and Moses
#Cryptocurrency: Everything You Need To Know »