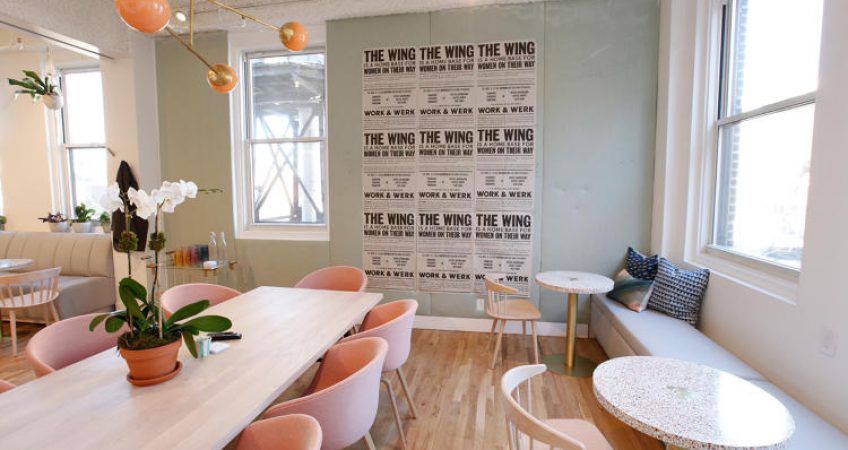 Chances are, if you’re a professional woman in New York, you’ve needed this – a quiet space to get through email before heading out for late drinks, somewhere to change clothes and prep for an event or date after work, or even just a place to hang out and meet women you may never have crossed paths with otherwise. At least, that’s what Audrey Gelman is betting on. Gelman envisioned The Wing, which opened its doors on October 10, as a home away from home for its members, many of whom are high-powered professional women like Gelman.

In the early 20th century, women’s clubs were all the rage. These spaces gave women excuses to socialize—but also to mobilize around social issues, including inadequate education, substandard housing, and women’s suffrage. In New York alone, there were more than 600 women’s clubs, and more than 5,000 across the country.

The Wing harkens back to this tradition, which had its hub on Midtown Manhattan’s “Ladies’ Mile,” a late-19th century shopping district that women could frequent without a male companion. Today, Ladies’ Mile is a historic district, and the Wing is located not far away (though Gelman admits that the original draw for the location was its proximity to the L and F trains).

From a functional standpoint, The Wing is nearly three quarters open working spaces, with couches, tables, and chairs. The space also has a personal section, with showers, lockers, a pumping room, and a makeup room, as well as a conference room, phone booths, library (of only female writers, of course), and cafe—addressing many of the needs of a working woman, sans workout facility.