For its 10th anniversary art issue, W Magazine features two social media darlings on its cover: Kendall Jenner and Gigi Hadid. But rather than a typical celebrity photo shoot, the pair are wearing prosthetic noses and animal ears, against a highly retouched background.

The cover and photo shoot, created by Ryan Trecartin and Lizzie Fitch, two LA-based artists known for their digital influenced work, was inspired by Snapchat.

“We were inspired by Snapchat and what you see there to tell a story about what Ryan Trecartin describes as the Disneyfication of the world,” said W’s editor-in-chief Stefano Tonchi.

The other stories are Snapchat-specific versions of longer videos and text articles that will also live on W’s website and be printed in the magazine. The distribution of content, repurposed for multiple platforms is a key part of W’s digital strategy. 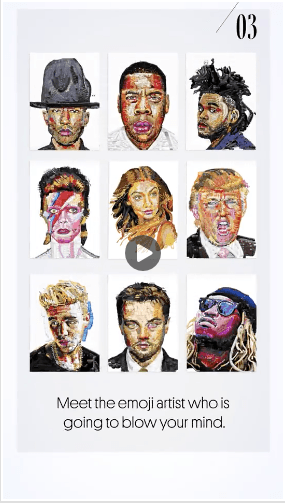 A screenshot of one of W’s Snapchat stories.

While the pop-up channel is a first for W, the glossy is following in the footsteps of a number of other publishers and fashion brands. Burberry has previously used pop-up channels to advertise new products, and magazine giant Hearst, which has run pop-up channels for Seventeen magazine, now wants to do the same for its brands like Harper’s Bazaar and Elle. The wider trend, of course, is to get content and brands in front of younger eyes, although already 70 percent of W’s digital audience are millennials, between 18 and 34.

“Curated content for our readers where they’re consuming content is the total goal,” said W’s publisher and chief revenue officer Lucy Kriz. “And the ability for us to reach millions of new eyeballs of new millennials is incredible exposure for our brand.”

Tech That Will Change Your Life in 2021

#DIY Your Food Is in the Mail