The Year in Food Technology and Innovation

It’s been quite a year for technological innovation in the food world. There were new developments in the way people order food, from legitimately useful phone apps to odd but interesting pizza tattoos. Between robots providing delivery service to pizza-dispensing ATMs making their way into the United States, this year saw both highs and lows in food technology and innovation.

Here’s a look from EATER.com: 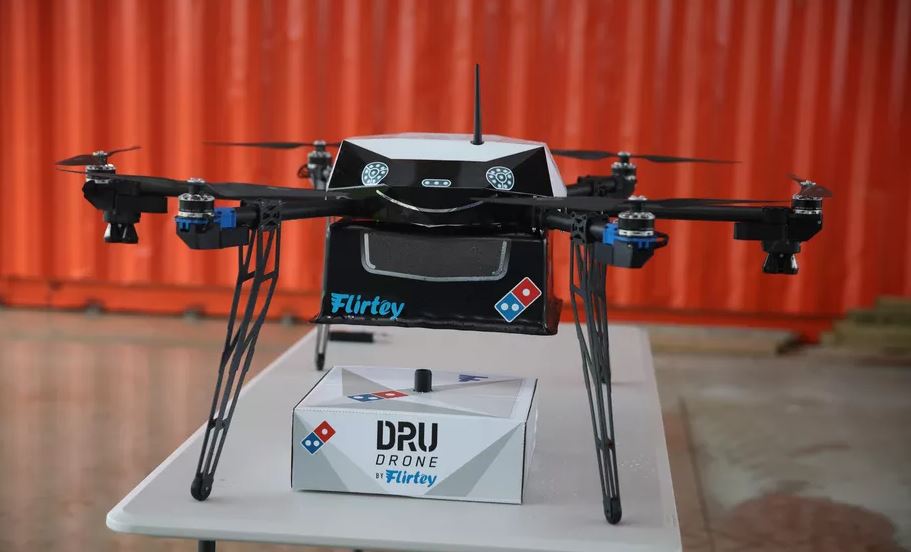 Domino’s takes home the gold this year in terms of delivery innovation. The pizza chain developed plans for everything from delivery drones and apps to robot delivery. Auckland, New Zealand is the lucky town where pizzas rain down from the sky: Domino’s rolled out drone delivery there in November. In Australia, the company created a pizza delivery robot that can carry 10 pizzas and make deliveries within a 20-mile radius. Domino’s also now offers mobile ordering by text, smartwatch and Apple Watch, and a “zero clicks required” app, which combined have accounted for more than half of the company’s U.S. sales.

America finally got the technology it deserves when a college in Ohio brought a machine onto campus that can dispense piping-hot pizzas within three minutes. While this genius contraption has been around in Europe for years, Xavier University in Cincinnati worked with a French company to bring the pizza ATM stateside. Another company in Florida is trying to spread the concept to hungry pizza lovers everywhere, with plans to roll out its own pizza ATM to cities around the state.

A California-based company designed a strategy that involves robots, humans, and mobile cooking to improve the quality of delivery pizza. Zume Pizza aims to cut down on the time between pizzas coming out of the oven and landing on a customer’s plate by cooking the pizzas inside a delivery truck, ensuring optimal freshness.

Google integrated mobile ordering into its Maps app, allowing people searching for restaurants to start an order directly from the app through on-demand delivery services like Seamless and Grubhub. Facebook also integrated food delivery into its app.

The burger chain with notoriously long lines finally introduced a way for customers to beat the line: a mobile app that allows users to place orders ahead of time and pick up in-store without waiting in line. The first tests of the iOS app began in October, and it is now operational in select U.S. cities. An Android version is apparently on the way.

Restaurateur Danny Meyer partnered with the restaurant reservation start-up Resy to integrate the Apple Watch into front-of-house service at his newly reopened restaurant, Union Square Cafe. The system will keep managers and sommeliers notified when new customers sit down or when the kitchen runs out of a menu item.

Nowait, an app that aims to nip wait times in the bud — by giving users the opportunity to put their names in for a table without being at a restaurant — received a massive vote of confidence from Yelp, which invested $8 million in the company this year.

This year Yelp also started using artificial intelligence to study users’ posted photos to assess which restaurants boast certain attributes that may appeal to customers. Will this lead to better Yelp dining recommendations? We’ll have to wait and see.

The latest iOS update includes some new emoji that expand the realm of what our digital selves can express regarding food. At long last, there’s a bacon emoji, and an avocado emoji. Other foods we’re excited about in this update include pancakes, stuffed flatbread, and paella, along with what is likely a cucumber (or pickle) and a croissant.

Chicago restaurateur Nick Kokonas launched Tock, a restaurant reservation software, in 2015, but this year the company received $7.5 million in funding from a group of investors and plans to expand far and wide in 2017.

The Seattle-based company launched a “grocery store of the future” concept this year, where customers can walk in, grab items, and walk out, without having to wait in line to pay. Customers scan into the Amazon Go store through a phone app, and systems are in place to record what people take away from the store and then charge their Amazon accounts.

China leads the field when it comes to robot waitstaff: a KFC in Shanghai introduced voice-activated robots that accept customers’ orders, and a Pizza Hut in the same city rolled out Casper, a bowtie-clad greeting and seating droid.

A Bay-area startup plans to open a restaurant that will employ a machine that can produce 400 burgers per hour. The Momentum Machines robot is apparently fully autonomous and can prepare burgers from start to finish, including grilling, assembly, and bagging.

High-tech robots at a restaurant in China were designed to prepare dishes of ramen in just 90 seconds, handling all stages of the process except pulling the actual noodles.

This year, Kawasaki developed robots that prepare sushi, and while the mechanical creations don’t quite have the deft skills of a high-end sushi chef, they make a convincing attempt at building a sushi platter.

A revolution could be coming to vending machines, thanks in part to 3D printing. Researchers in Finland are working to create 3D-printable snacks that are both healthy and customizable and can be distributed as readily as regular (often unhealthy) vending machine snacks.

Additionally, a company in Barcelona made advances in 3D-printed food this year with a $2,000 machine that can produce pizzas with an even crust, a layer of sauce, and cheese on top.

In addition to Domino’s drone delivery in New Zealand, Chipotle jumped on the dronebandwagon, testing airlifted burrito deliveries in conjunction with Virginia Tech, albeit just for a limited time.

A company called Foodpanda also made moves to improve delivery service, testing out drone usage to cut down on wait times for those expecting food.

Beyond the context of delivery, drones helped out in California this year, allowing wineries dealing with a drought to assess the health of their crops from the air. The drones were able to gather information on canopy growth and overall crop density, while ground sensors measured soil temperature and moisture.

Kimbal Musk, of the tech-minded Musk family, has spent years pushing the boundaries of restaurant food, and his new concept attempts to bring diners “non-industrial food,” or an alternative to fast food at the same affordable prices. The Kitchenette focuses on local ingredients for burgers, salads, soups, and more.

A company whose product is heralded as “the future of food” hit a large stumbling block this year. Soylent specializes in powdered meal replacements and food bars, yet those food bars have apparently made people “violently ill.” The company investigated and asked consumers to discard the bars, then ultimately halted production of its powders, finding customers who purchased the powders had similar stomach-related symptoms. The company is still investigating.

Because what do Millennials love more than taking selfies? The Atlanta-based company developed a “selfie bottle” with a built-in camera that registers when the bottle is at a 70-degree tilt and snaps a photo in the midst of a person drinking Coke.

A truck filled with 50,000 Budweiser beers drove 120 miles through Colorado without a driver behind the wheel. The truck was part of Uber’s self-driving fleet, appropriately named Otto, and it was the first journey for the vehicle.

A California-based company has spent years perfecting a device to allow individuals with serious gluten intolerance to test for the substance in their food. The result was the Nima Sensor and it was unveiled in March. A user inserts a portion of their meal into the triangle-shaped device, and within two minutes, the portable tool will determine whether that food contains gluten.

Other innovations from the year included a wine dispenser that was funded via Kickstarter, eco-friendly compostable K-cups, and touch-screen ordering at McDonald’s.

The Rise of the #Robo TV host

Excerpt via The Future More and more reality TV competition shows are...

#DIY Your Food Is in the Mail