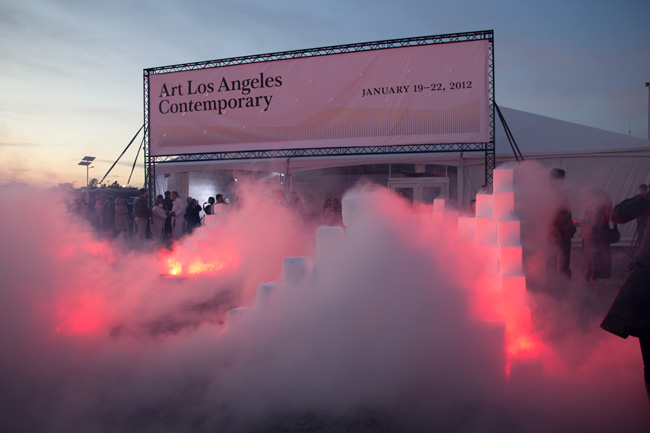 Art Los Angeles Contemporary is currently hosting its third edition at the Santa Monica Airport’s Barkar Hangar with a winning program; half Los Angeles and half international gallery participation. Tim Fleming, the Director of ALAC states, “there’s a real sense of hospitality,” when describing the tone of the fair. He continues, “ALAC was created from the idea that Los Angeles deserves and is ready for a contemporary art fair that champions the whole LA art scene and offers a good cross section of what’s happening in Contemporary Art.” 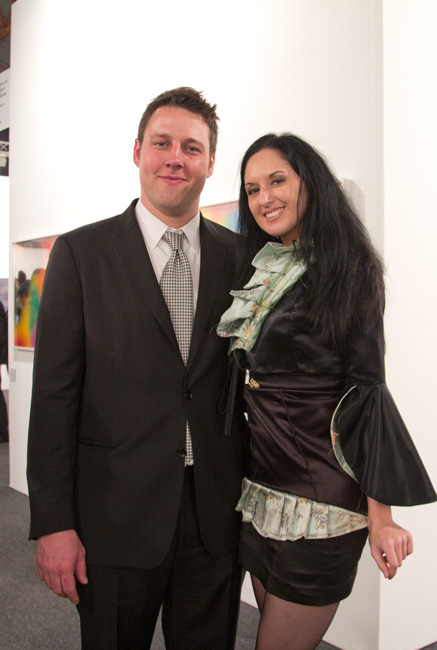 The fair opened at sunset, under a wide open sky, with an illumination performance of Judy Chicago’s Disappearing Environments. Patrons were awestruck as twenty-five tons of dry ice formations completely shrouded the entrance with fog. The epic re-staging, originally produced in 1968, kicked off the Pacific Standard Time’s (PST) 11-day Performance and Public Art Festival. 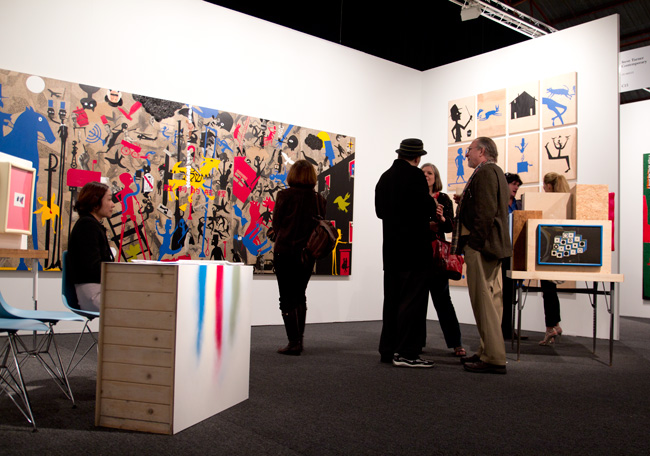 Deborah Grant’s “In the Land of the Blind, the Blue Eyed Man is King,” was the powerful centerpiece of Steve Turner Contemporary in LA. Grant is the first artist Turner worked with upon opening his Miracle Mile gallery in 2006. The female artist reworks images as in-depth investigations, usually addressing a historical artistic narrative while combining it with a present day event (Hurricane Katrina), pertinent to her own life experience and identity 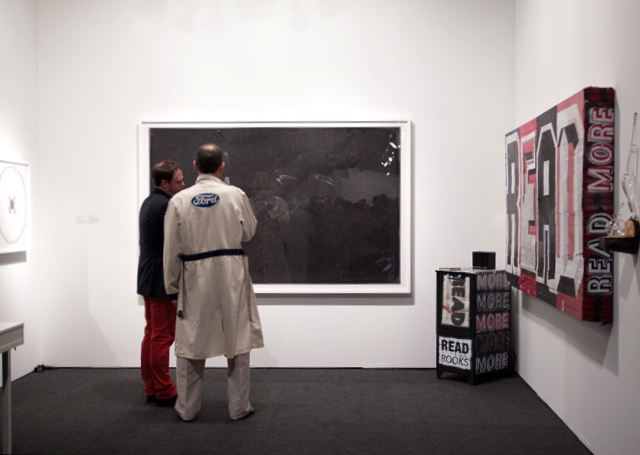 The meditative, poetic quality of the work of Issac Layman was inescapable. Scott Lawrimore of Lawrimore Project in Seattle, describes Layman’s process as “finding moments of grandeur and spirituality in the mundane things that surround him.” Lawrimore continues, “it becomes his cosmos.” The artist only shoots images in his own home and most recently opened his first museum show at the age of 33. 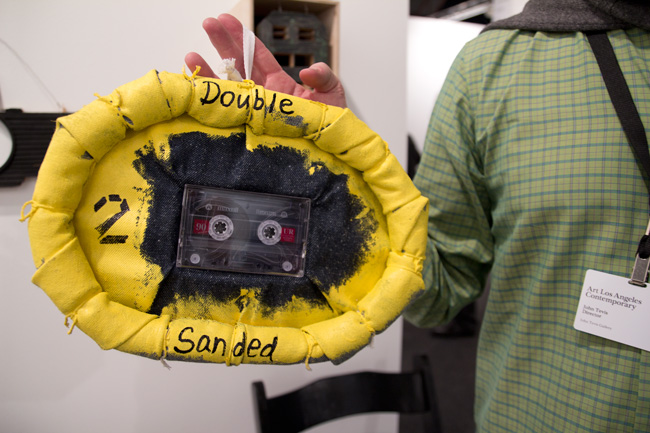 The John Tevis Gallery, located in the Marais district of Paris, occupied a small booth, exhibiting the works of two LA based artists, Dave Hughes and Anthony Ocone. Tevis, describes his artists as opposing counterparts designating Hughes as “post-literate,” where language makes it’s own aesthetic judgement and presentation; Ocone as “pre-literate,” becomes completely “mute” in his renderings of pastel rainbows and rabbits. 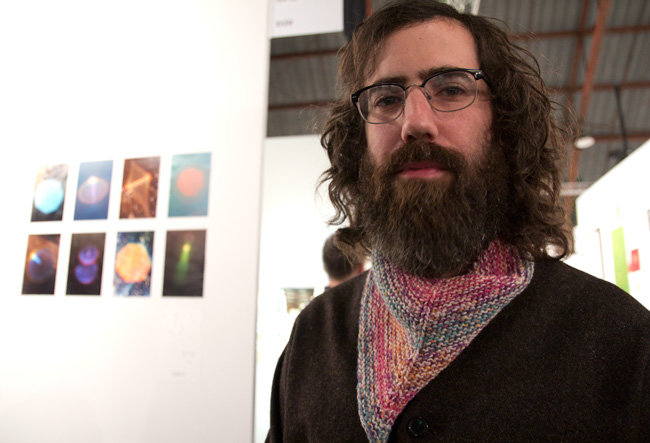 The Fourteen30 Contemporary located in Portland, Oregon exhibited a solid roster at this year’s fair. Bobbi Woods, Dan Attoe and Kristan Kennedy, all Portland based artists, work in various mediums but are a complimentary group that speaks well of the curation of Jeanine Jablonski. She explains,”There is an immediacy to their work, with tactile surfaces that make you want to touch it, or even lick it. ” 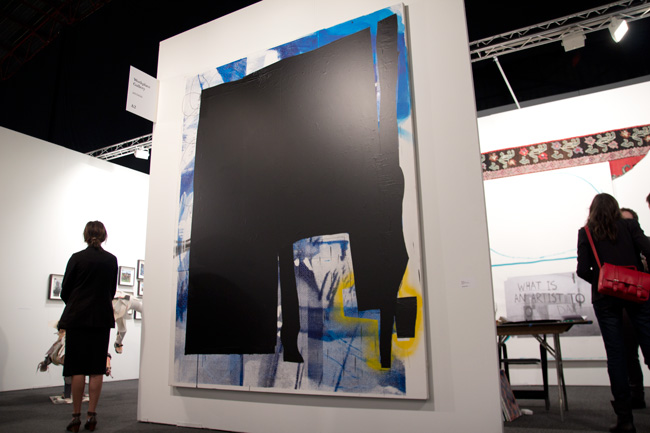 Workplace Gallery, based in Gateshead, UK, exhibited five large scale pieces from emerging artist Mike Pratt. The work is a vibrancy of color and a “free-style” remixing and re-sampling of stylistic approaches and his own paintings and screenprints. The slightly neurotic constant layering expresses an antagonism towards convention and authorship and clearly describes the creative expression and frustrations shared amongst many of today’s artistic contemporaries. 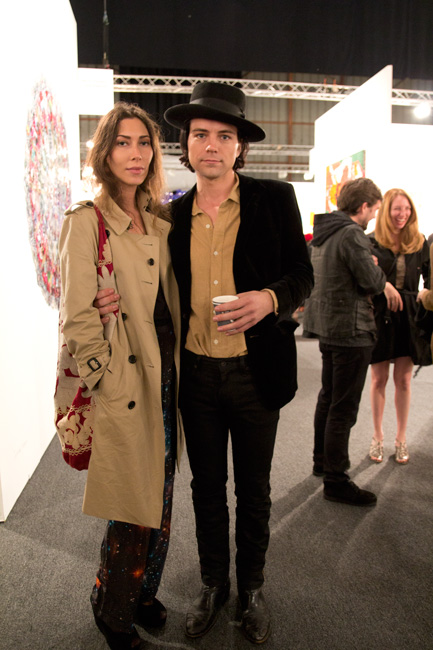 Quint Contemporary Art of La Jolla, CA was one of the few galleries who exhibited a contemporary master. Owner, Mark Quint said he was attracted to Mel Bochner’s work starting in the seventies and credits Bochner as a contemporary pioneer. Bochner’s work is expected to be very popular with ALAC’s audience along with the light works produced by San Diego based artist, Adam Belt. 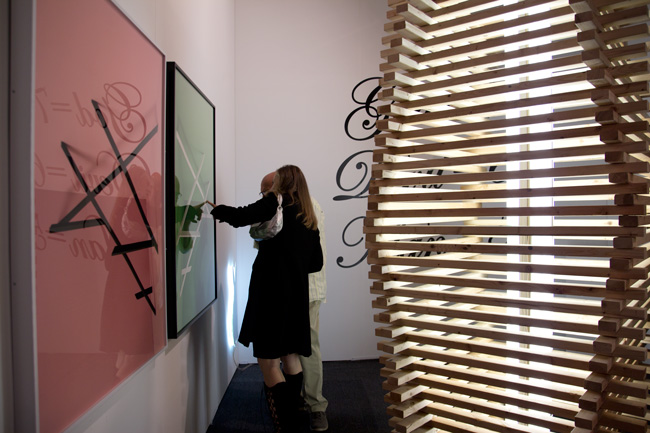 One of the best uses of space was the Yautepec Gallery in Mexico City. Ryan Perez’ Hero and Villian light sculpture was monumental in the small space but successfully received. Gallery Directors Brett Schultz, an expat from Chicago and Daniela Elbahara were surprised to be the only Latin American gallery represented and explained their roster as young and emerging artists, most of which have no formal art education. Schultz continued the thought by describing his job as not only helping his artists to develop their careers but also to create new collectors. He explains, “a collector of similar age or from the same generation is more likely to relate to the art.” 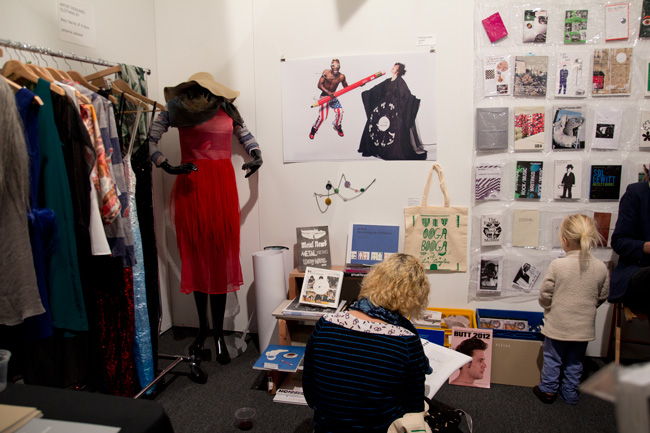 Wendy Yao describes her space, Ooga Booga, as more of a store that works with the creative community. “People are excited about the mix. We include a lot of different people – not one particular camp, not one style. For us, it’s about mixing different levels and price points.” She describes Tim Fleming’s invitation warmly, “It’s nice to have someone running a fair that is so enthusiastic about all the aspects of the LA art community.” 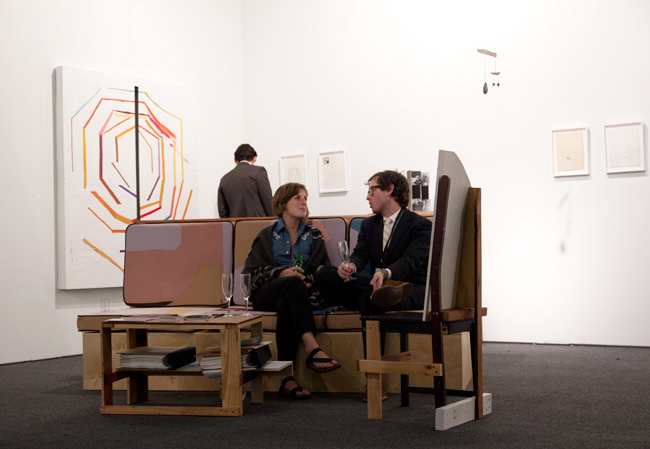 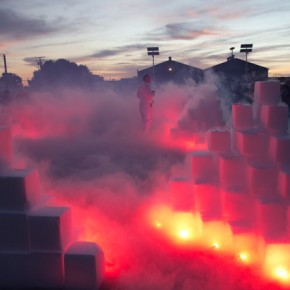