Somehow I missed the fact Tim van Bkerestijn—aka Benny Sings had a career revitalization from co-writing the Rex Orange County’s mega-hit “Loving Is Easy” from 2017.  A kajillion streams on Spotify and “Benny Sings” was back from the dead, sort of. According to the Dutch-born 44-year-old artist, happy music, or his take on it, made his phone popular again.

From the outset, recording with Sonar Kollektiv back in 2003, Bkerestijn has always been crafting those yesterday/tomorrow pop melodies. With 70’s soft-rock Gawds type arrangements that borrow from AOR, heart-warming touchy feels, and chillwave energies, he’s collaborated with Goldlink, Cornelius, Mayer Hawthorne, John Mayer, Rita Ora, Anderson. Paak, and Mac DeMarco with ease. Finding “Benny Sings” very accessible music on the independent label Stones Throw Records, actually makes sense. Anyone familiar with the “eternally evolving experiment” started by label boss Peanut Butter Wolf in 1996 knows, from hip hop to modern-funk, boogie to experimental psychedelic rock and post-punk to MF DOOM, J-Dilla, and MadLib on down, the label is an eternal reservoir of quality, not limitations. So funky blue-eyed dudes worldwide, rest easy. Benny and his soft-rock brand have a proper space at the imprint. 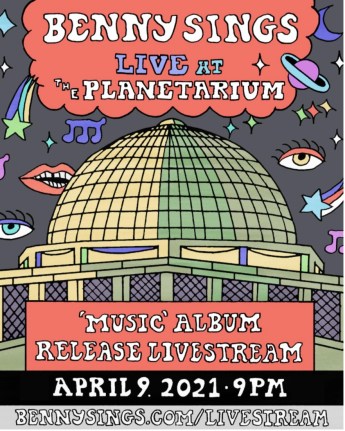 City Pop, his statement record from 2019 had all the grown-ass melancholy bliss and gloom one could take.  The plinky piano ‘can’t front’ mood of “Not Enough”, with its funk adjacent low-simmer bop, cavorting about with vibes and feels straight out of Terrestrial AM Radio. The co-written and co-produced song by Mayer Hawthorne possessed a fondness, some sweet reflection on a situationship on the outs. It re-established Tim van Bkerestijns’ on mic personality. Allowing anybody with decent hearing to do the mental shout-HEY…We believe this guy-relish his style of pop vocal jammers, despite the storyline. No matter if he’s singing a Craigslist missed connection post or about his boo running out on him over a pack of smokes. “Benny Sings” the brand, even with the Whole Foods grocery shopping energy vibe, succeeds with that ‘Kermit in a Komono’ vocalic. Tim van Bkerestijn jots life’s imperfections and successes down, flipping it all into killer lyricism, referencing Nora Ephron’s “Everything Is Copy”.

Music, his second release for Stones Throw and seventh in total, expands on that formula. Delicious piano riffs and tree trunk low-end boom get transformed into his pop aesthetic. “Rolled Up” the hummable earworm duet with Mac DeMarco, gets over by way of 70’s mellow gold stoner schlep rock with just a touch of that Bee-Gees post-disco glimmer. With lyrics that describe this indoor mania the world is currently going through, it’s the melody, quirky bass, and piano interplay that makes you wanna shirk your world-weary shoulders a bit, giving it up to the AOR thickness.

It’s funny. The artist who once called his own music “trying to make soul but not succeeding” feels right at home surrounded by condensed beats and melodic strings, evidenced on “Break Away” which, at first, comes off like a shiny-shirt-era Mase hip-hop single. But the Loggins-and-Messina’s type triplicate vocals slide in, rescue the track, switching gears into a legit two-stepper of a ballad, that knocks. Waiting for that jazzy syncopated number? “Run Right Back (feat Cautious Clay)” gives off early Stevie Wonder in the 70’s vibes, TONTO synth era, shining bright and intricate. Based again on that piano framework that powers all of Benny’s jets.