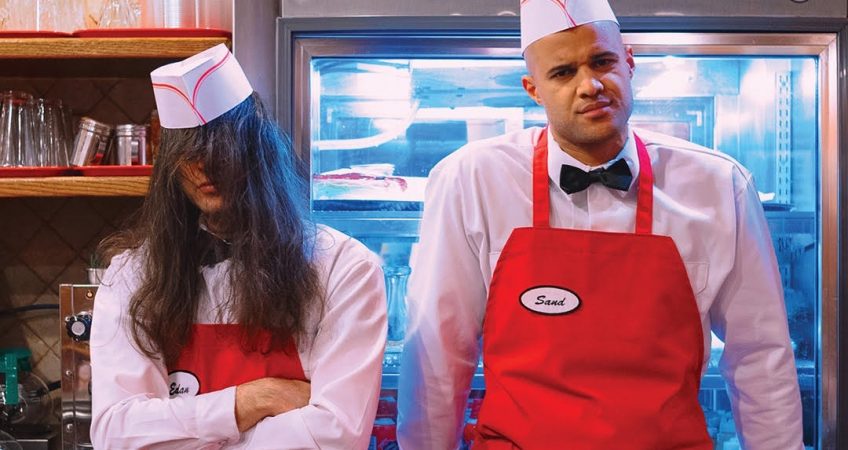 Homebody Sandman and Edan’s collaborative debut, Humble Pi, is a pivotal release for the year, adding another landmark group effort to the Stones Throw catalog. They are charting a new path for modern hip-hop in the 2010s and one that couldn’t be needed any more than it is. Magnetic and technically acrobatic vocalism from Homeboy Sandman is coupled with the eclectic and dynamically charged production of Edan, never letting the energy down for a second and riding heavy into the psychedelic and soulful atmospheres of his trademark sound. Homeboy Sandman has become one of the most versatile and gifted MCs, with his abilities on the mic flooding the mind with an infinite field of thought throughout Humble Pi. The debut album from the pair is a phenomenal contribution to their already stellar careers and gives new perspectives on what happens when unique minds like this meld as one in the hip-hop world.

First connecting on Homeboy Sandman’s 2016 Stones Throw LP, Kindness For Weakness, Edan brought the legacy of his Primitive Plus and Beauty of the Beat lineage to the table, but only for one track, hinting at the possibilities of their genius together across a full album. Humble Pi is the results of this expansion, living up to the anticipation of Edan’s past works and adding another important record in Homeboy Sandman’s path as one of the most consistently working MCs, dropping an album almost every year since 2007. The elusive Edan has more separation between releases, really signifying how much he believes in the value of working with Homeboy Sandman.

The music videos created for Humble Pi are just as impactful and enjoyable as the album, showcasing a variety of styles from directors and creators Kagan McLeod, Steven Tapia, and Robert Mayer. Stones Throw has always been known for incredible visual work that goes in tandem with the records, recently showcasing brilliant videos for Sudan Archives, NxWorries, Jonti, Washed Out, Mndsgn, and many more. By that standard, the team of directors for Homeboy Sandman and Edan also knocked these videos out of the park, bringing a vision that truly enhances the music. PulpLab reached out to all three directors of these music videos that complete the album’s visual presentation for insights into their process and what it meant to contribute to Humble Pi.

“Edan got in touch with me years ago after seeing this poster I did in 2007 (he appears near the bottom). So I think that’s how I got on his radar, and as a huge fan of his, I was super hyped to hear from them about the video prospect. Originally, the plan was for a different animator to each do one of the seasons. I’m not sure how I ended up doing the whole thing, but animation is grueling and expensive, so budget might have been a factor. Also, Edan preferred an analog look so the art would be hand drawn (my preference anyway). ” – Kagan McLeod

I had to pick up after effects on the fly so there was a learning curve there. It would have been better to have more hand-drawn animated sequences in the video, but just what we ended up with was about two and a half months of work. It takes a lot of drawings to fill four minutes! Regardless, I’m super happy to have worked on it. I wouldn’t have chosen any other artist over these dudes to work with.

“I was relaxing one night and had Spotify playing in the background. I heard this boom bap hip-hop track that sounded like a Public Enemy song. The warrior-like chants pulled me in. I texted Homeboy Sandman to congratulate him on the track being played on Spotify. He told me that this was perfect timing because him and Edan needed videos for their new project. I was excited about directing this video because I’m usually wary of social media and the internet.” – Steven Tapia

The creative direction was a collaborative effort. At the time my Mac computer died and I was in search of a tech shop in NYC. I threw in the idea of the guys hijacking a tech shop and tricking people into giving them their devices. They would eventually destroy these devices. They started adding in ideas of randomly walking around smacking devices out of peoples hands, making sandwiches out of iPhones, playing catch with devices in the tech shop, and baseball in the backyard. We felt that the video needed to be funny and dark at the same time. We also threw in a little bit of Office Space at the ending.

I wanted this video to be more focused on the narrative aspect rather than a typical hip-hop performance video. I wanted the color palette to be desaturated, and moody. I edited to the beat, but I tried not to stay stuck to a grid. I shot most of the video in slow motion because it lends itself to a cinematic feel. I also added in some subtle visual effects in areas that needed it, like the security camera shots, fire and sparks on the computers, and glass shattering on the laptops in the ending.

The guys were super chill, cooperative and fun to work with. They even threw in some of their ideas in on the fly. I also had a great team with them that day. My partner JC Yurnet made sure I was on point with every shot. I would work with the guys again in the future. I love their music and energy.

“The Gut”
From Robert Adam Mayer

“Working with Homeboy Sandman and Edan for me was a true pleasure, to be honest. I hold these artists in the highest regard as people, and creatives, thus I wanted to do the best I could on this project. These guys are brilliant so you have to come with your A-game. There was very open communication and trust on this collaboration as we sought a dope outcome.” – Robert Adam Mayer

I pitched a few ideas to Sandman who approved the underwater room concept, then Edan came up with the modernized period piece, chose the wardrobe with the aid of stylist Crystal Lee Kovacs, and suggested Tom Fitzgerald as the Motion Graphics artist. I built the sets in my Mom’s pool in Jersey. Shout out to Mom. We filmed the water scenes in one day with two cameras, myself and filmmaker Juan Roque, who also edited the piece. It was really an open collaboration throughout the process. Thus the success of this video is owed to our group aesthetic.

The yellow suits were inspired by my college pals Neil Fazzari and Rich Porter. The biggest challenge was the buoyancy of the room walls and Lisa Wolter lent a hand holding them in place. To see this project come to life was the highlight of my summer for sure. Thank you to this awesome team and Stones Throw.