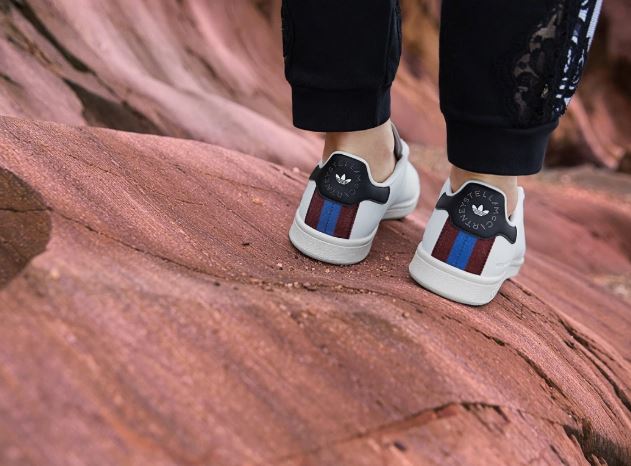 As a lifelong vegetarian, Stella McCartney doesn’t use any leather or fur in her designs and has always been committed to cruelty-free fashion. This week she builds on her long-term collaboration with Adidas to reveal an ethical twist on the three-striped sportswear giants iconic tennis sneaker, the Stan Smith. Leather-free and suitable for vegetarians, the Stella Stan Smith pays homage to the original while reflecting Stellas signature details and representing all that she stands for.

Ever since she left Chlo and launched her eponymous line in 2001, fashion’s eco warrior has proved that we can be both chic and conscious. Long before sustainability was a hashtag or industry buzzword, Stella McCartney has led the way and encouraged the industry to follow. This collaboration is another step forward.

“The Stan Smith sneaker is just an incredible design that has stood the test of time. I’m a fan of the original as much as almost everybody is,” Stella explains over email. “It just connotes a heritage in tennis and performance that was really important at the time. Now it seems like part of the furniture in footwear, a classic, but at the time it was pretty revolutionary and obviously the cutting-edge technology in tennis footwear for the athletes.”

One of the top tennis shoes of all time — both in sales and influence — Complex named it 14th on its list of most influential sneakers of all time. Before the oversized volumes and unexpected composites of dad sneakers captured fashions imagination, the chic, no-fuss minimalism of Stan Smiths established them as fashion’s go-to sneakers. After presenting era-defining collections, Marc Jacobs and Phoebe Philo regularly adopted their unassuming glamour as they stepped out onto the catwalk to take their post-show bow. Everyone from Yohji Yamamoto to Raf Simons to Nigo to Jeremy Scott have designed their own versions, but it’s unsurprisingly taken ethical design activist Stella to create the world’s first vegetarian-friendly pair.