Joan Juliet Buck on ‘The Price of Illusion,’ #Instagram, #GIRLS, and Today’s #Counterculture

Author and icon Joan Juliet Buck comes from the world of cultural disruptors — from her childhood days spent in the company of filmmaker John Huston, for whom her father worked as a cameraman, to her tenure as the London correspondent of Andy Warhol’s Interview magazine, to editorials for Harper’s Bazaar on art photographer Taryn Simon, Patti Smith, and an essay about the contemporary femme fatale. With the release of her memoir, The Price of Illusion, the discerning writer decodes the insider world of art, fashion and publishing, revealing the complexities and power struggles behind the scene.

We were delighted to chat with Joan over the phone, as she shared her thoughts on Instagram, HBO’s Girls, the Women’s March and today’s counterculture.

PL: We’re living in the Instagram generation, where everyone lives their lives as content.  How you feel about it?

JJB: My whole book The Price of Illusion is about reality versus illusion. So, on Instagram, the sunsets the wonderful holidays, the dinner the dinner the dinner, my face, my glass, my new shoes. All of that is little bit like when people– long time ago apparently, I never lived through this but I heard that people would show their holiday slides to guests. And the guests would writhe in boredom and despair on the couch as the host clicked through…“and this was the guy who took us out on the boat — look at the lobster he caught.” 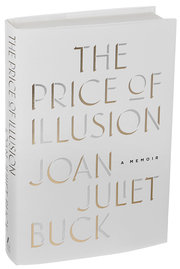 “I think that magazines, a portable object that you can touch that has pictures that you can tear out and stick to the wall and look at for a really, really long time will always be important.”

I don’t want to look at magazines telling me what various celebrities, who I’m unfamiliar with, are wearing on the red carpet. That is fine online.

I want a magazine like New York Magazine, which gives me in my hand every two weeks a tactile picture of today, what is going on.

PL: You seem to have favored cultural disrupters in your life —  people like Andy Warhol.  What do you think about today’s counter-culture?

JJB: Let’s face it, when the counter culture was the most active it was the sixties and the Vietnam War was going on and the country was run by these, you know, old guys in grey suits and never trust anyone over thirty. All of that was going on.

“The counter culture today is about kindness, openness, curiosity, grace and heart.”

PL: Thank you for that. You were witness to so much great filmmaking throughout your career. How do you feel about the current uprising of TV over movies? Do you have any guilty viewing pleasures we should know about?

JJB: When I was the editor in chief of Paris Vogue, when I had left America, a friend began sending me cassettes. I had a triple system so I could read American cassettes of the The Sopranos and Sex in the City.

“It is the end of TV simplification and it’s the beginning of a more complex rich and longer lasting way of telling stories.”

I was so excited, I thought, “It’s safe to go back to America.” And when I came back to America Six Feet Under started, which was one of my favorite series ever, and I often watch the very last episode. Do you remember at the end when she goes off in the car?

PL: Super powerful. That was a great series.

JJB: Right? And then she becomes a really, really old lady, Lauren Ambrose. It’s so beautiful. And I think that story telling —you know, classically, we say that storytelling began with Homer with the epics, the Iliad and the Odyssey. These weren’t things that you could compress in to 90 minutes, these were stories that went on and on and on. Gods and men fighting it out and destiny and the meaning of everything.

And I think that long form television is a return to the roots of storytelling and is the most exciting medium there is.

PL: Absolutely. That is why we are all glued to it.  It is crazy, isn’t it? And you can be watching something different on each device.  I don’t know if you do that but I have my laptop, my TV and then my tablet. Are you someone that watches and reads from different devices from room to room?

JJB: No. Because I grew up in movies and I was a movie critic and I was a TV critic I have respect for the work that people are doing. So, I sit down– I sit down and watch.

JJB: I adore Shoshanna with her little fashion-y thing and she’s tried to make herself in to a cartoon.

PL: With Japan and everything, yes.

JJB: Japan and you know having to take the job at the cat petting place and branding, and she pretends her friend is her assistant. She’s sort of the fragility of ambition really.

I love the recent Lena Dunham episode with the writer.

PL: Yeah that was crazy. I thought of having this interview with you in the context of writers talking to writers.

JJB: Well, you know, that actual thing has never happened to me, but I have had moments when I was younger when I was interviewing people when– I mean not quite to that degree but there would suddenly be a kind of change in the atmosphere and I’d think, “Whoa, did he just ask me to massage his feet? “

JJB: That actually happened one day, no names.

But I find the subtlety of what’s going on on TV so extraordinary. I was addicted to Orphan Black until suddenly there were just too many clones for me to cope with. Did you watch Orphan Black?

PL: No, but I’m a fan of Black Mirror, have you seen that?

JJB: Oh, my god. 15 million merits, the one when he is on the bicycle?

Joan: It’s so brilliant. And it is so near to the truth all of those. It’s complete genius. A performance artist friend of mine pirated it somewhere and gave it to me a couple of years ago and because of who it came from I thought it was like this weird edgy underground thing and then I realized, “No, it’s a proper English series.”

JJB:But yes, and even more scary because it’s not about monsters on the wings of planes, it’s about stuff that we are one millimeter away from.

JJB: You know; I love shows that are sophisticated with a kind of social responsibility. The fifties were all about pretending things were better than they were, all this Brady Bunch. Starting with The Sopranos, you have to put shows on the air that have the balls to be uncertain, which I find you know that’s really exciting.

“Because life is uncertain, you don’t actually know how things are going to turn out and nothing is ever black and white.”

So, I find I’m very proud of the sophistication of Americans.

PL: Thank you. I hope I have time for one more question. I would just love to hear a little bit about your writing process and how do you get unstuck if you’re procrastinating — or does that not relate to you?

JJB: Let’s just say I procrastinated on this book for 20 years.

When I started writing it I didn’t procrastinate anymore. What my process is…I wake up I have my coffee with cocoa in it, I take my vitamins, I sit down, I look up. Its four o’clock and I’m really hungry. I eat something. I got back to work, I work until ten o’clock eleven o’clock, maybe midnight. I watch a couple of my favorite TV shows. Go to bed super late, two three. Wake up about ten and start all over again.

Get a copy of Joan’s memoir, The Price of Illusion, in stores now.

22 Secrets Hidden In “Get Out” You May Have Missed