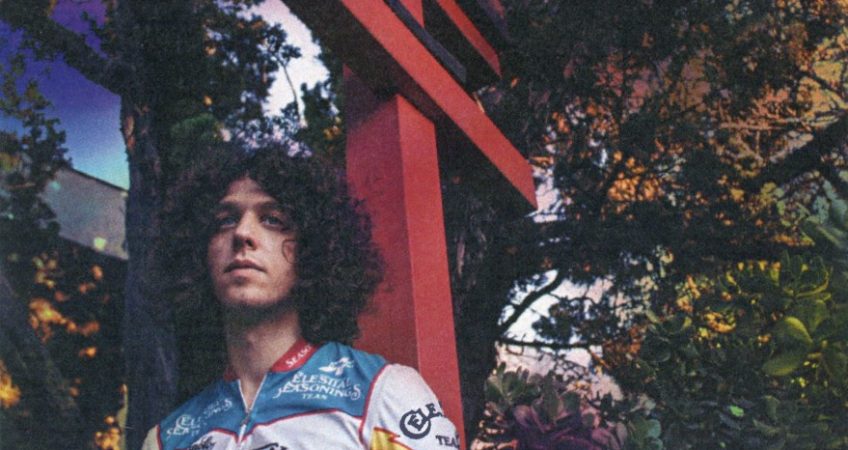 Los Angeles artist Lionel “Vinyl” Williams describes himself as “obsessed with harmony.” He’s built a handsome career snatching celestial pop frequencies from an alternate plane and literally recording those moments to VHS tape for the world to be seduced by. His 2016 Brunei, released on the Toro Y Moi Company Records imprint, displayed Williams’ particular knack for wrapping melodic, woolly and ornate arrangements around a vigorous rhythm package. It’s the beautiful Free Design meets Talking Heads while dropping acid with George Duke combination you didn’t know you needed in your life.

Williams continues that bouillabaisse of funky bass lines, lo-fi tape hiss and combination of old and new influences with his July 20th release Opal. It’s being released on the French label Requiem Pour Un Twister. As a visual artist, he’s made music videos for Unknown Mortal Orchestra and Tears For Fears while racking up touring miles with Mount Kimbie and Toro Y Moi. He will be performing this Saturday, July 21, at The Lodge Room in Highland Park Los Angeles.

We were lucky to speak with him earlier this month. Accompanying our Q&A is an advance listen to Millennial Ballroom, Williams’ homage (of sorts) to record producer Curt Boettcher, who many regard as the progenitor of sunshine pop.

PULP LAB: Greetings. Just want to thank you up front for taking the time to do this.  Your last release, Brunei, caught my ear on first listen. The nervous Talking Heads type fonk of “Feedback Delicates,” the warm swath of keyboard melodics in ”L’Quasar” and ”Celestial Gold,” it just moved me. Not having any history of your music at all. I cannot urge people enough. Those who might have missed it in 2016, go search out Brunei. You will be pleased.  Can you explain to us what your new release, Opal, has in store?

Vinyl Williams: Thanks for the enlivening words!  Over the course of the last couple years, I really started diving into the history of progressive sunshine pop and just letting it churn the folds in my mind into new hyperbolic structures.  My mental Colosseum began to be filled with a volcanic ocean of ideas, and when it started to overflow, I started catching the runoff haphazardly without the proper infrastructure planned beforehand.  So I improvised, usually beginning with drums, performing what a song “would be” if it existed in some kind of ultimate world.

This record is the shortest I’ve ever made, quintessentializes the timeless realm I’m always dreaming of.  It combines the lush ambience of Brunei with the progressive tempo changes & weird time signatures of earlier works.  LA-based 60s harmonious pop artists such as Curt Boettcher, The Association, St. John Green, David Axelrod; as well as Vancouver-based Northern Lights, and NY-based The Free Design – all gave rise to a feeling of infinite potential.  Once And Future Band, from the Bay Area, was the single largest modern influence on this record. They’re basically doing god’s work.

PL: With this new record, you recorded individual tracks onto a VHS camcorder, as well as using handheld cassette devices.  Is that correct?

VW: Similar to Street Fighting Man, I started recording all of the guitar tracks on my handheld cassette recorder. (Panasonic RQ-2730)  I also employed my RCA camcorder to bounce synth tracks, as well as record entire song mixes through to tuck under the digital mix. The cool thing about camcorders is they’re usually time-locked so they’ll almost always line up perfectly with digital tracks, without having to re-align everything.

PL: What was the purpose and did the desired effect materialize?

VW: To get the most warbley, timeless sound possible without any plugins.  Basically, I attribute these pitch-vibrato imperfections as organic, living counterparts that add the feeling of tangibility to an otherwise intangible digital recording.  I’m not a purist by any means. There are endless ways to get these sounds. But the act of submission to analogue artifacts really excites me – sending something through a magnetic system to allow for completely unforeseeably altered results.  I think I achieved the sound I wanted this time around, although even since this album was recorded I’ve learned a lot of new things that I’ve been applying to the next album.

PL: Seems music was always around you from a young age. Your father Mark Towner Williams, was a session drummer who also toured with Air Supply. Also, you are the grandson of composer John Williams of Star Wars, Jaws, ET, etcetera.

How do you think this lineage informed your musical ideas?

VW: At an early age I negated the idea of being a musician because it seemed like everybody & everything in my life revolved around these irrational invisible frequencies.  Instead, I wanted to design roller coasters, ski resorts, & collage magazines together. But at the age of 10, I could no longer deny the tingle of my entire being when I sat down at a drum set.  My great-great-great-great-great-great grandfather was a Civil War drummer. It goes back very far. So when I felt & connected with that primordial DNA, there was nothing that could stop that latent avalanche of possibilities from blooming & unfolding.

As you can probably tell, I’m obsessed with harmony.  There’s something inside of me that is pushing me to find new juxtapositions of chord voicings, to try to return to that state of frisson, or musical goosebumps.  A lot of music I listen to gives me goosebumps, but for my own to do so is extremely difficult. I have to push myself to the fullest degree of sonic risk-taking to allow it to happen.  I conversed once with John about the structures of trees and how they relate to the inherent harmony of our manifest world. He noted that every iteration of repetition is in the golden ratio, but unlike trees, music can be impressionistic and take on any structure it wishes, even without being rooted (although it ultimately should be).  So instead of linearly growing leaf-to-leaf, branch-to-branch, music can dance around these iterations a-linearly, and form möbius patterns that cannot exist in the material world while still sustaining their equilibrium. Some of these ideas pushed me to use huge intervals in bass lines, and juxtapose the bass notes over guitar/synth chords to walk on the thin cliffside between harmony and dissonance.

PL: Could you explain what exactly Non Plus Ultra is and its role as it relates to your artistic endeavours?

VW: Yeah, Non Plus Ultra was formed as a nonprofit in California to develop a community appreciation of the arts by sponsoring and organizing all ages events, such as concerts, screenings, and the occasional JPL lecture.  We’ve also provided resources, expertise, and a facility for independent artists & musicians. Our recording studio is where Opal was recorded, as well as many other artists from around the world. We’ve also had a shooting stage, fabrication shop, and temporary workspaces staffed by our members & made available to local artists.

Before we started NPU, the original members had a venue in Chinatown called Naud.  This was before I fully joined the group, although I was frequenting Naud on the weekly.  We became such good friends and immediately started influencing each other’s music & artwork, and hosting big jam sessions which were multi-track recorded.  Once we found a spot together, we joined forces by moving in with one-another and being completely immersed in the art of each other’s lives.

PL: I read somewhere you have a fondness for the 1992 album Spooky by Lush. If that is correct, why so?

VW: Yes, I love Robin Guthrie’s production techniques, and equally, love Miki Berenyi & Emma Anderson’s songwriting.  I once met all three of them in St. Malo France on the road with Morgan Delt. I was on a very heavy dose of truffle mushrooms from Amsterdam.  I asked him how he got the reverb sound on all the Cocteau records + Spooky. And he said he didn’t have a reverb at the time. So I asked, “Well, then how did you get the reverb sounds?”  And he replied, “Two big muffs and a tape delay.” Let that marinate inside your brains you lil music nerds. Essentially Spooky is one of the most harmonious albums I’ve ever heard, from front to back.  It’s just simply soul food for me.

PL: What have you been listening to currently that you cannot get enough of?

Vinyl Williams’ OPAL will be released on July 20, 2018.
Pre-order the album