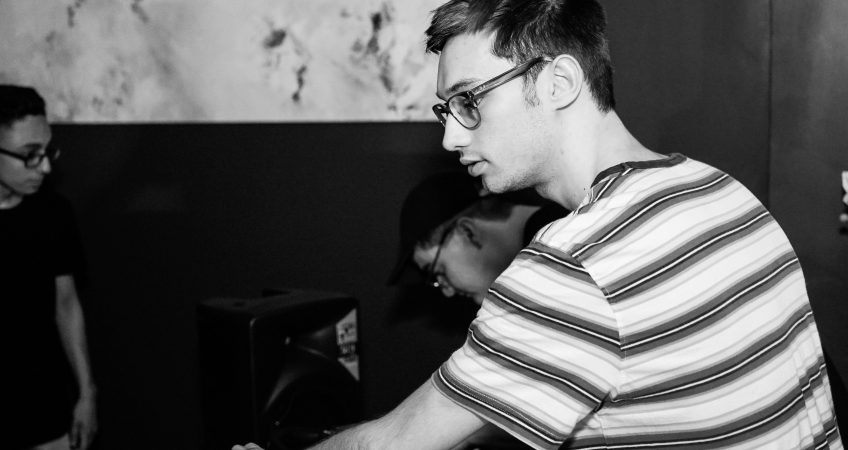 Modern electronic music has splintered into an endless stream of forms, encapsulating degrees of experimentation that have put the genre into the forefront of musical innovation. In the path of the next generation of forward-thinking electronic producers comes Chicago’s Blake Skowron, launching his debut album on the Los Angeles based indie label Dome of Doom. Spine collects twelve tracks of immersive sound design cloaked in the setting of downtempo, garage, beats, ambient, and more, rhythmically pulsing and stylistically shimmering.

At a young age, Blake Skowron is already sharing stages with modern icons and future legends, opening up for The Glitch Mob in Chicago and appearing as a special guest with Huxley Anne, Great Dane, Tsuruda, and Woolymammoth for the Los Angeles monthly Hypnothesis. One cycle through Spine and there’s no question why he’s taking flight into the realm of touring and launching music with a revered underground label such as Dome of Doom. Released on cassette and digital formats, Blake Skowron enters a lineage of releases across the label that includes Linafornia, Daedelus, CLYDE, Huxley Anne, Speak, Elusive, Holly, Woolymammoth, Kenny Segal, Eureka The Butcher and many other innovators.

Unlike most from his region, Blake Skowron is a young producer that’s deviated from the foundations of electronic music solely created in Chicago, exploring sounds from all over the world and fusing them into states all his own. A snapshot of influences before his time and those current, Spine reveals charismatic flair and unbridled creativity. The most alluring aspects of the album are the crevices of space packed with subtle sound design and how the other elements are affected from these layers. In one moment, percussion elements ricochet off morphed melodies and in another, effects laced vocals are launched to the sky from bubbly rhythms. Through this, ambiance thrives everywhere, even when serving as a shadow of the powerful state of euphoria each track contains.

Stand out piece, “Cold”, is a perfect reflection of the immersive state of sound design that exists around the ample rhythms and warped melodies across the record. A glistening wave of synth mirrors winds passing through a corridor or blanketed area of trees, with delayed overtones that rise and bubble between. Hard hitting downtempo drum work crashes in and the delayed elements wrap over everything. Suited for both the club and headphone experience, “Cold” is just one doorway into what makes Spine so special. “Shatter” is a bookend to the mentioned track above, soulful and exuberant, bursting with a sense of optimism that is rarely felt across the LP. You can hear the influence of the Los Angeles beat scene, shimmering with glowing sound design and unique percussion elements that rimshot between every few measures. There’s a peacefulness that carries into the ending cut “Lay (Outro)” and ends the album with a state of resolve and true finality.

“Honest” has a duality, with ambient swells supplanted between some of the most illustrious dance music present on Spine. One moment the track is diving down a darkened path of sound collage and the next the walls are shattering from how heavy the bass and drums flow. “Clap” is also duality driven, initiated with a subdued and bright melody line that is subtly transformed through each major section. Once the apex of energy hits, the music changes its energetic scheme entirely, moving into a darker and more devious state. This all breaks down and finds a doorway back into the peaceful state the song began with. These transformations split back and forth, blending in and out of another with perfection and ease. Blake Skowron has a way of finding these slip points in a state of melding, never forcing any transition into another. Another very strong element as to why this album stands out amongst the pack.

One of the most surprising tracks on Spine is the pop-laced experiments of “No Flight”. Featuring vocalist Skylar Bennett, the music has the appeal and charisma to stand out with the best from Warp Records and Ninja Tune. This is the outer edges of dance music and what could one day be the truest sense of what pop evolves towards. “Levitate” and “ISO” are two more examples of how diverse and dynamic the album is and deviate the furthest from the dance floor. Uplifting a realm of consciousness and spirituality that is as ancient as its futuristic, these pieces add a surprising state of contemplation and inner reflection. Every track across Spine mirrors new paths and opens new sonic doorways, giving the music volumes of listens that remain fresh and exciting.

Conceptually, the principles Blake Skowron put forth on Spine were simple: create music that reflects the emotional and mental states he was going through each day. Like the spine of the human anatomy, each track holds the weight of his life. Heaviness, deprivation, elation, necessity, growth, uncertainty, and many more motions of life surface through, balanced through the symmetry of life’s interconnectivity. Honest music created without a filter of outside perception, this is the kind of record that is a welcomed addition to the current state of electronic music.

Blake Skowron plays at The Echo in Los Angeles with Huxley Anne, Great Dane, Tsuruda, and Woolymammoth
on October 19th.