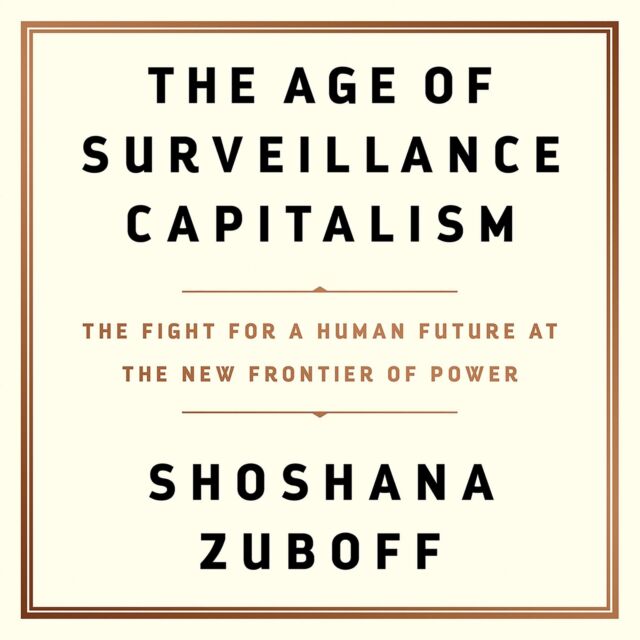 Shoshana Zuboff’s new book is a chilling exposé of the business model that underpins the digital world.

The headline story is that it’s not so much about the nature of digital technology as about a new mutant form of capitalism that has found a way to use tech for its purposes. The name Zuboff has given to the new variant is “surveillance capitalism”. It works by providing free services that billions of people cheerfully use, enabling the providers of those services to monitor the behaviour of those users in astonishing detail – often without their explicit consent.

“Surveillance capitalism,” she writes, “unilaterally claims human experience as free raw material for translation into behavioural data. Although some of these data are applied to service improvement, the rest are declared as a proprietary behavioural surplus, fed into advanced manufacturing processes known as ‘machine intelligence’, and fabricated into prediction products that anticipate what you will do now, soon, and later. Finally, these prediction products are traded in a new kind of marketplace that I call behavioural futures markets. Surveillance capitalists have grown immensely wealthy from these trading operations, for many companies are willing to lay bets on our future behaviour.”

We’re living through the most profound transformation in our information environment since Johannes Gutenberg’s invention of printing in circa 1439. And the problem with living through a revolution is that it’s impossible to take the long view of what’s happening. Hindsight is the only exact science in this business, and in that long run we’re all dead. Printing shaped and transformed societies over the next four centuries, but nobody in Mainz (Gutenberg’s home town) in, say, 1495 could have known that his technology would (among other things): fuel the Reformation and undermine the authority of the mighty Catholic church; enable the rise of what we now recognise as modern science; create unheard-of professions and industries; change the shape of our brains; and even recalibrate our conceptions of childhood. And yet printing did all this and more.

Why choose 1495? Because we’re about the same distance into our revolution, the one kicked off by digital technology and networking. And although it’s now gradually dawning on us that this really is a big deal and that epochal social and economic changes are under way, we’re as clueless about where it’s heading and what’s driving it as the citizens of Mainz were in 1495.

Which is why the arrival of Shoshana Zuboff’s new book is such a big event. Many years ago – in 1988, to be precise – as one of the first female professors at Harvard Business School to hold an endowed chair she published a landmark book, The Age of the Smart Machine: The Future of Work and Power, which changed the way we thought about the impact of computerisation on organisations and on work. It provided the most insightful account up to that time of how digital technology was changing the work of both managers and workers. And then Zuboff appeared to go quiet, though she was clearly incubating something bigger. The first hint of what was to come was a pair of startling essays – one in an academic journal in 2015, the other in a German newspaper in 2016. What these revealed was that she had come up with a new lens through which to view what Google, Facebook et al were doing – nothing less than spawning a new variant of capitalism. Those essays promised a more comprehensive expansion of this Big Idea.

And now it has arrived – the most ambitious attempt yet to paint the bigger picture and to explain how the effects of digitisation that we are now experiencing as individuals and citizens have come about.

While the general modus operandi of Google, Facebook et al has been known and understood (at least by some people) for a while, what has been missing – and what Zuboff provides – is the insight and scholarship to situate them in a wider context. She points out that while most of us think that we are dealing merely with algorithmic inscrutability, in fact what confronts us is the latest phase in capitalism’s long evolution – from the making of products, to mass production, to managerial capitalism, to services, to financial capitalism, and now to the exploitation of behavioural predictions covertly derived from the surveillance of users. In that sense, her vast (660-page) book is a continuation of a tradition that includes Adam Smith, Max Weber, Karl Polanyi and – dare I say it – Karl Marx.

Digital technology is separating the citizens in all societies into two groups: the watchers and the watched

Viewed from this perspective, the behaviour of the digital giants looks rather different from the roseate hallucinations of Wired magazine. What one sees instead is a colonising ruthlessness of which John D Rockefeller would have been proud. First of all there was the arrogant appropriation of users’ behavioural data – viewed as a free resource, there for the taking. Then the use of patented methods to extract or infer data even when users had explicitly denied permission, followed by the use of technologies that were opaque by design and fostered user ignorance.

And, of course, there is also the fact that the entire project was conducted in what was effectively lawless – or at any rate law-free – territory. Thus Google decided that it would digitise and store every book ever printed, regardless of copyright issues. Or that it would photograph every street and house on the planet without asking anyone’s permission. Facebook launched its infamous “beacons”, which reported a user’s online activities and published them to others’ news feeds without the knowledge of the user. And so on, in accordance with the disrupter’s mantra that “it is easier to ask for forgiveness than for permission”.

When the security expert Bruce Schneier wrote that “surveillance is the business model of the internet” he was really only hinting at the reality that Zuboff has now illuminated. The combination of state surveillance and its capitalist counterpart means that digital technology is separating the citizens in all societies into two groups: the watchers (invisible, unknown and unaccountable) and the watched. This has profound consequences for democracy because asymmetry of knowledge translates into asymmetries of power. But whereas most democratic societies have at least some degree of oversight of state surveillance, we currently have almost no regulatory oversight of its privatised counterpart. This is intolerable.

And it won’t be easy to fix because it requires us to tackle the essence of the problem – the logic of accumulation implicit in surveillance capitalism. That means that self-regulation is a nonstarter. “Demanding privacy from surveillance capitalists,” says Zuboff, “or lobbying for an end to commercial surveillance on the internet is like asking old Henry Ford to make each Model T by hand. It’s like asking a giraffe to shorten its neck, or a cow to give up chewing. These demands are existential threats that violate the basic mechanisms of the entity’s survival.”

The Age of Surveillance Capital

is a striking and illuminating book. A fellow reader remarked to me that it reminded him of Thomas Piketty’s magnum opus, Capital in the Twenty-First Century, in that it opens one’s eyes to things we ought to have noticed, but hadn’t. And if we fail to tame the new capitalist mutant rampaging through our societies then we will only have ourselves to blame, for we can no longer plead ignorance.

Google is joining the live-streaming craze with a new app designed to...