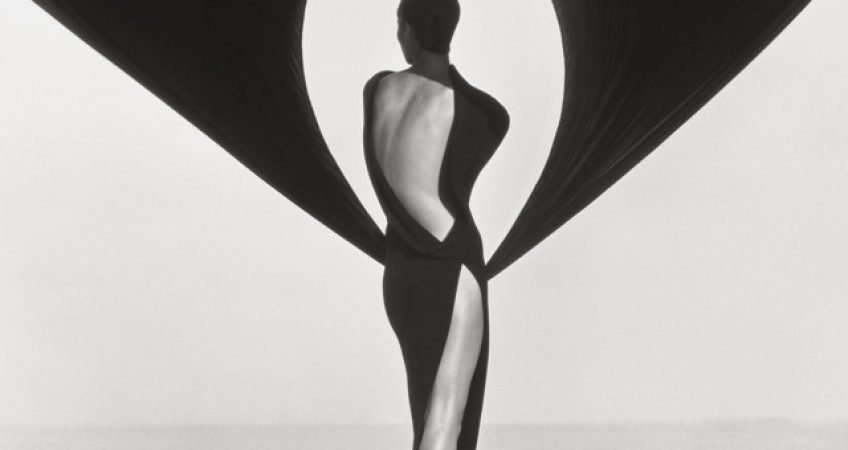 Earlier this week, Paul Martineau, Associate Curator of Photography at the J. Paul Getty Museum, led a tour of the museum’s newly acquired Herb Ritts: L.A. Style show. As the Curator of the exhibition, Martineau provided an enlightening explanation of the cultural impact of Ritts’ signature style on the 80′s and 90′s. He also shared the process behind his elegant and thoughtful curation.

Los Angeles native Herb Ritts (1952 – 2002) began his career in the late 70′s. Mostly self-taught, he developed a style that incorporated the natural California light and open landscape. He’s one of the most successful artists at Fahey/Klein Gallery. Having grown up next door to Steve McQueen, Ritts had a classical humanistic approach towards glamorous figures. His minimalist compositions and relationship to nature enabled celebrities to be intuitively received by a broader audience. He portrayed men in vulnerable poses and women in strong, calm positions. Martineau confirms Ritts as a leader in having helped sculpt the notion of the sensitive straight man that emerged in the nineties.

It was the celebrity rite of passage to be photographed by him.
– Paul Martineau

Ritts denied that he had an L.A. style but his renowned use of light, water and body culture reinvigorated an international excitement for Los Angeles and Hollywood. His ability to create photographs that could criss-cross between industries, where art became commerce or vice versa, is the crowning testament to the power of his imagination, and marked a significant cultural movement towards overflowing synergy between art, popular culture and business.

The show features less celebrity photography in favor of images that have never been seen before or were published once. All the prints are vintage, and heavily survey his work in fashion and nudes. The Nude collection examines the radical change he provoked in depicting the human form. His organic lines and aesthetic became the dominant hallmark of his portraits of well-known athletes and dancers, including choreographer Bill T. Jones. In his book entitled Duo (1991), Ritts was introduced as the first photographer to respectfully portray a gay relationship.

As if Ritts and breakfast on a most glorious day at “The Getty” isn’t enough, the tour included a video program of his video and commercial work and concluded with Portraits of Renown: Photography and the Cult of Celebrity, a brief visual history of famous people in photographs, drawn entirely from the museum’s collection. This smaller concurrent exhibition, also curated by Paul Martineau, further honors Herb Ritts by providing a broader context through a wide range of historical figures including Josephine Baker (1925) and one of only eight photos in existence of Edgar Allen Poe (1848).